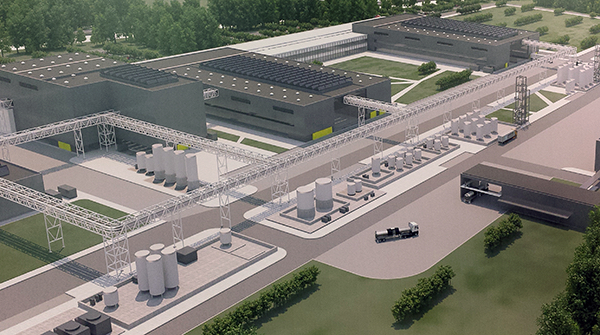 Nova Nordisk’s $1.85 billion Johnston County pharma plant: How will it be built?

The facility will produce active pharmaceutical ingredients (API) for a range of Novo Nordisk’s current and future GLP-1 and insulin medicines. Once fully operational in 2020, the Clayton facility will ensure production capacity for diabetes medicines in the U.S. for the decade ahead.

Once complete, the new facility will measure 833,000 sq. ft. and have a footprint of 417,639 sq, ft, – the equivalent to approximately seven football fields.  Novo Nordisk expects to create a significant employment effect during the construction period with up to 2,500 people working on the project at peak construction.

“As the prevalence of diabetes has grown in the U.S., so too has the demand for effective treatments,” said Lars Rebien Sørensen, president and chief executive officer of Novo Nordisk. “It gives me great pride to break ground on our new facility site in Clayton where we have an existing, strong organization. This site will play a vital role in enabling us to meet the needs of people living with diabetes in the U.S. for years to come.”

“Novo Nordisk’s billion dollar decision to bring this landmark manufacturing facility to North Carolina underscores its commitment to our state and confidence in our state’s talent,” said governor Pat McCrory. “This expansion of the current site and workforce highlights our ability to be a leader in bio-manufacturing at the global level.”

The new site is situated adjacent to Novo Nordisk’s 457,000 sq. ft. Clayton facility. Expanded several times since it was inaugurated in 1996, Novo Nordisk’s current plant in Clayton is one of the company’s strategic production sites responsible for formulation, filling and packaging of diabetes medicines. The plant also assembles and packages the company’s FlexPen and FlexTouch prefilled insulin devices for the U.S. market.

On August 26, 2015, Novo Nordisk announced that it would invest $2 billion USD into production facilities in Clayton; Malov, Denmark; and Kalundborg, Denmark, with $1.8 billion of this amount being invested in the Clayton plant.