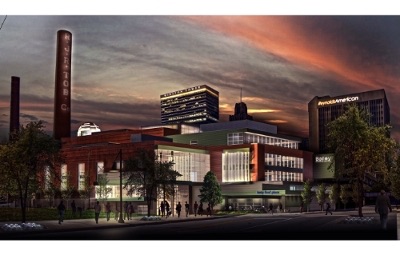 Wake Forest Innovation Quarter has announced the sale of portions of Bailey Power Plant in Winston-Salem to Wexford Science+Technology, a BioMed Realty company. Wexford will redevelop approximately two-thirds of the Bailey Power Plant property, including the main building and most of the surrounding grounds that include the iconic chimney stacks. The redevelopment project comes nearly 20 years after Bailey Power Plant ceased operations.

The $40 million Wexford project is the first stage in the redevelopment of the entire Bailey Power Plant property. Wake Forest Innovation Quarter plans to work with additional developers to repurpose two smaller buildings, the Morris Building and Building 23-1, on the southeast and southwest corners of the property.

The City of Winston-Salem and Forsyth County have each agreed to provide $3 million in support of the redevelopment, through a combination of public infrastructure and economic assistance reimbursements.

“This is an essential development,” said Wake Forest Innovation Quarter president Eric Tomlinson. “Bailey Power Plant represents the final stage in the repurposing of these historic former tobacco district buildings in Wake Forest Innovation Quarter. As with many other projects here, the new future for Bailey Power Plant is the result of a strong and fruitful public-private partnership that has included Wake Forest Baptist Medical Center, Wexford, the City of Winston-Salem and Forsyth County following the generosity of R.J. Reynolds in gifting the property to Wake Forest.”

As with several other projects in the Innovation Quarter, Wexford will utilize historic tax credits to make this development possible. R.J. Reynolds donated the Bailey Power Plant lot and all structures on it to Wake Forest Baptist Medical Center in 2010, along with approximately $2 million for environmental abatement work, which was completed in 2013.

Including its redevelopment of the main building of the Bailey Power Plant and the soon-to-be-complete 60-series buildings, Wexford’s investment in the Innovation Quarter stands at approximately $390 million, one of the largest capital investments by one company in the history of downtown Winston-Salem.

“We are very pleased to, once again, be the developer of choice for this latest expansion of the Wake Forest Innovation Quarter with the redevelopment of Bailey Power Plant,” said Dan Cramer, senior vice-president of development for Wexford Science+Technology. “This new addition to the innovation community in Winston-Salem is the latest outgrowth of the dynamic partnership we have with the city, the county and Wake Forest Baptist Medical Center, and we are proud to be a part of what this project will mean for the community.”