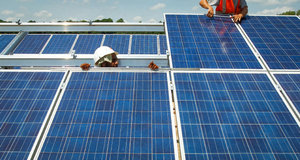 Solar panels cover a 35-acre field that once produced corn, tobacco and other crops in a corner of southeastern North Carolina. When the sun shines, the panels generate enough electricity for hundreds of homes, reports The State newspaper.

“I initially thought this was a pipe dream,” said farmer Billy Dean Hunt, recalling discussions with a solar company about using his cornfield for a sun farm. “But I started talking to them. They convinced me they would honor what they said. So I did it.”

The scene near Rowland is found increasingly across North Carolina. Solar farms dot the landscape from the Blue Ridge mountains to the sandy coastal plain – the result of an emerging renewable energy industry.

North Carolina has encouraged the development of solar power through generous tax incentives and a state law requiring electric utilities to use some renewable energy. These policies are a key reason North Carolina often rates high in national rankings of solar-friendly states – and why solar farms are growing steadily.

“This shows we are progressive,” said Laurinburg Mayor Thomas Parker, whose community has a solar farm similar to the ones in nearby Rowland. “Anytime we can add a dollar to the tax base, we are interested. I believe in it. I think this will be more prevalent in the future.”

Since 2007, when North Carolina began requiring power companies to use renewable energy, about 100 solar farms have registered to open, according to the N.C. Sustainable Energy Association, a group that tracks the sun business.

Some of those may not have cranked up yet, but the association says the number of companies registering with the state gives an indication of the interest. Before the law passed five years ago, North Carolina didn’t have any solar farms, the association reports.

The increase in solar farms reflects a larger trend in North Carolina, where investor-owned utilities must provide up to 12.5 percent of their power from renewable sources.

North Carolina’s renewable and energy efficiency industry employs more than 15,000 people and has generated some $3.7 billion in gross revenue this year, the association says. Companies providing solar services have increased 76 percent since the renewable energy requirement passed the N.C. Legislature five years ago, according to surveys by the Sustainable Energy Association.

The idea behind North Carolina’s solar effort is to diversify energy sources and stimulate the economy with a relatively new type of industry.  Solar will never replace traditional power sources because the sun doesn’t shine all the time. But if North Carolina’s effort continues, solar boosters say the state could reduce dependence on coal and nuclear power and stabilize electric bills for customers. Coal and nuclear power plants, both of which create toxic waste, buy fuel from out of state to make energy, and fuel supplies such as coal are subject to price variability.

In contrast to North Carolina, South Carolina has no solar farms, even though the states have many similarities, according to the S.C. Clean Energy Business Alliance, a group that favors renewable power.  Nationally, the Palmetto State is one of the least-friendly places in the country for solar power, studies have shown. Unlike North Carolina, the state has no requirements that energy companies use solar, wind or biomass. And last spring, S.C. legislators failed to pass a solar tax credits bill that mirrored North Carolina’s and was expected to make development of sun farms easier.

Solar farms periodically spark questions about whether they are appropriate in some communities. Some people say they are unsightly and take up too much space, while others question whether it’s a good idea to replace productive farmland with solar farms.

Conservative lawmakers also question the wisdom of adopting government policies to encourage an industry they say would have trouble surviving on its own. Efforts are under way in North Carolina and, possibly at the federal level, to scale back incentives and requirements for renewable energy.  Read More.

LEED Certification and Freedom of Choice Preserved in Compromise HB 628...