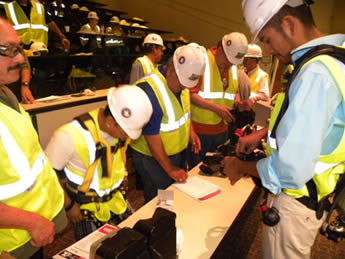 According to new figures from the Labor Department, fatalities dipped slightly in 2011 at U.S. job sites and workplaces, including the construction industry.

Transportation incidents accounted for more than 2 out of every 5 fatal work injuries in 2011.  Of the 1,898 transportation-related incidents, about 57 percent (1,075 cases) were roadway incidents involving motorized land vehicles.

Fatal falls, slips, or trips took the lives of 666 workers in 2011, or about 14 percent of all fatal work injuries. Falls to lower level accounted for 541 of those fatalities. The revised Occupational Injury and Illness Classification System (OIICS) added the capability of recording the height of the fall. In 2011, the height of the fall was reported in 451 of the 541 fatal falls from higher level. Of those 451 cases, about one in four (115) occurred after a fall of 10 feet or less. Another fourth (118) occurred from a fall of over 30 feet.

For more detailed information on fatal injuries by incident, see the 2011 tables at www.bls.gov/iif/oshcfoi1.htm.

For more detailed information on fatal injuries by industry, see the 2011 tables at www.bls.gov/iif/oshcfoi1.htm .