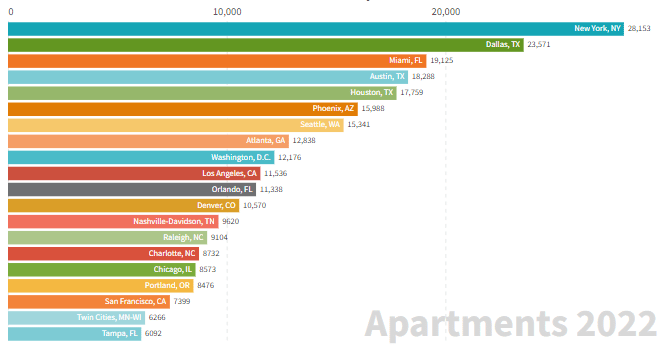 A recent report from RentCafe.com shows the Raleigh-metro area will hit a five-year construction high this year with more than 9,100 new apartment units to be completed in the area.

According to the report, the city will record a 106 percent increase this year, over the number of apartment units built in 2021.

“This construction boom is driven by pent-up demand for apartments nationwide, especially as some renters postpone their dream to become homeowners amid soaring inflation and rising interest rates,” the rentcafe report stated.

“As a consequence, New York developers have upped their game and the metro is on track to see the highest number of units delivered in the last five years.”

Miami is in second spot, with the existing supply of rentals unable to keep up with sky-high demand. Here, too, developers have plunged into a building frenzy that’s set to culminate in record-breaking numbers in 2022 compared to the area’s completions in the last few years.

The North Carolina report says the following numbers are expected to be completed by the end of 2022:

Raleigh is one of five metro areas in the U.S. forecast to reach a five-year high, along with Phoenix, Seattle, Orlando, Nashville, Portland and Tampa.

RentCafe considered properties that had a certificate of occupancy issued between Jan. 1 and June 30 to estimate apartments expected to be completed this year.