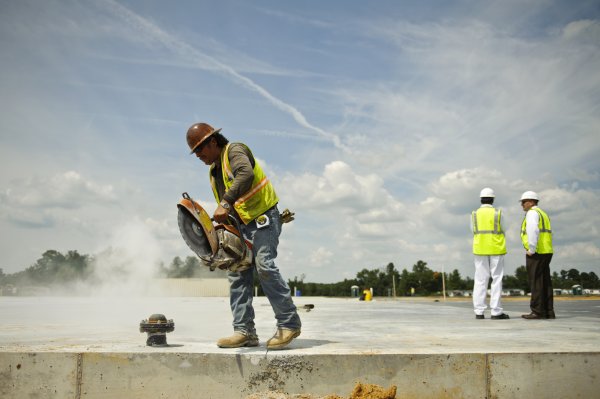 Month by month, the state employment numbers have carried a grim message: While America climbs out of recession, North   Carolina lags.  In July, the state unemployment rate, which had been drifting downward, rose slightly to 8.9 percent while the national rate edged down to 7.4 percent, reports the Fayetteville Observer.

Hundreds of thousands of people in North Carolina remain out of work. Many who have jobs see their pay eaten away by inflation. In much of the state, good-paying manufacturing jobs have gone away, replaced by lower-paying jobs in the service sector.

The numbers mask the fact that North Carolina has been creating jobs at a faster rate than the nation, economists say. It just hasn’t created enough jobs. “The main reason that our unemployment rate is high – it’s not that we haven’t been creating jobs, it’s that our workforce has been growing fast,” said Brent Lane, director of the CarolinaCenter for Competitive Economies at the University of North Carolina at Chapel Hill.

In the depths of a stagnate economy and on a wave of anger at President Obama over his health care reform law, Republicans took over North Carolina’s government in the 2010 and 2012 elections.  They said Democrats mismanaged North Carolina throughout the prior century and promised that tax cuts and reduced business regulation will bring prosperity.  “High tax rates are killing North Carolina’s ability to compete with surrounding states, attract good jobs and grow our own businesses,” state Sen. Thom Goolsby of Wilmington wrote in June in a column extolling a plan to cut state income taxes.

In July, the Republican-controlled legislature and Gov. Pat McCrory lowered income taxes. Earlier this year, they cut unemployment insurance benefits for laid-off workers, a decision that eventually will reduce taxes for employers.

“Demand is driven by people having money in their pockets,” said state Rep. John Szoka, a Republican from Cumberland County who supported the tax cuts. “It’s not driven by running tax rates up. If you have another $100 a month in your pocket, what are you going to do with it?   “The options are: You can spend it, you can save it, you can invest it. Any of the three things that you would do with that extra $100 a month is potentially a boost to the economy,” Szoka said.

But Democrats and liberal organizations say the tax cuts are coming at the expense of basic government services, such as education and good roads, that are needed to maintain a prosperous economy.

“The state didn’t cut its way to being the best place to live. It took years of intentional public investments,” Chris Fitzsimon, executive director of the liberal N.C. Policy Watch, wrote in August. “Sadly, the budget passed this year by the General Assembly and signed recently by Gov. McCrory again rejects the lessons of the relatively prosperous past.”

Economist Lane at UNC and Mike Walden, his counterpart at N.C. State University, say elected officials have little power to help the economy.  “I would argue, very little,” Walden said.  Tax cuts “could be modestly helpful, particularly the reduction of the corporate income tax rate,” he said.

Walden, Lane and two other economists took part in a hearing this year on proposed state tax cuts.  “I think we were all in agreement that these changes were not going to be a game-changer for the state,” Walden said.  Other factors drive the state economy, Walden said, including labor costs, the quality and training of its high school and college graduates, and its climate.

North Carolina has created jobs faster than the nation as a whole since the recovery began in the summer of 2009, federal statistics show. That growth is not reflected in the state’s unemployment rate, however, because while those jobs were being created, thousands of people moved here.  “By the measure of job creation, we are back to where we were (before the recession), in terms of absolute number of jobs, but we haven’t caught up with the growth of the workforce,” Lane said. “So we’re still in the hole. The hole just got deeper while we were digging.”

Since July 2007, 450,000 people have moved to North Carolina, according to state statistics. They join a natural, birth-driven population growth of 225,000. There are not enough jobs for them all.

“Or as Mike Walden says: We’ve been importing unemployment,” Lane said.  “People are moving here. And either they move here and they’re unemployed when they get here, or they move here and take the jobs that our current residents who are unemployed might have gotten,” he said.  Lane looks at people’s pay when considering the health of the economy.

During the recession, manufacturing jobs were replaced with lower-wage service-sector jobs, he said.  Manufacturing shed nearly 200,000 jobs since 2007, according to the federal Bureau of Labor Statistics. Few of those jobs have come back.  The service industry dropped by about 160,000 jobs in North Carolina during the recession. It has since recovered all those positions and added nearly 50,000 more.

Economic analyst Allen Freyer of the N.C. Budget & Tax Center is worried about the shift to a service-based economy. He found that in 10 of the state’s metro areas, the leisure and hospitality sector was either the first or second fastest-growing industry. “Unfortunately, this industry pays $8.30 an hour, more than $12 below the statewide average,” a Budget & Tax Center news release says.  The Fayetteville area’s civilian economy, highly dependent on the tax-subsidized paychecks of Fort Bragg’s personnel, is seeing growth in the service sector.

Sykes Enterprises is building a call center here that initially is to employ 150 people and could grow to as many as 500. Two hospital campuses going up in eastern Hoke County will employ several hundred people. The Department of Veterans Affairs is building a 250,000-square-foot health care center on Raeford Road in western Fayetteville that is expected to have 650 employees.

In August, Gov. McCrory’s office announced plant construction and expansions across the state that promise to hire 1,100 people. Those include 45 jobs in a warehouse and retail center that a luxury furniture and rug-making company plans to open in Lumberton, about 45 minutes south of Fayetteville.  The Rooms To Go furniture chain is building a warehouse in Dunn, about 30 minutes northeast of Fayetteville, that is expected to employ 220 people.

An hour southwest of Fayetteville, Scotland County has the state’s highest unemployment rate, at 16 percent. Since August 2012, manufacturers there have announced $84 million worth of investment that is expected to create 125 jobs.

Global conglomerate Meritor Inc. in August said it would spend $3.5 million to retool its factory near Maxton. The plant makes components for civilian and military trucks, but its military truck contract is coming to an end, said Jerry Rush, the company’s senior director for government and community relations.  So the military vehicle portion of the Maxton plant is being converted to make axles for municipal buses and emergency vehicles, such as firetrucks, he said.  The conversion will save 55 of the plant’s 110 jobs and add two more, he said.

FCC North American makes automotive transmission parts at its factory in Laurel Hill. It is expanding that plant and will open a new one near Maxton. Ford and Honda are two of its customers.  “We were impacted by the recession in 2008,” said administration manager Bob Kendall.  It was a difficult time, but now the company is growing, he said.  “Most automotive suppliers that were able to make it through the recession have seen sales grow dramatically over the last two years. New car sales are reaching levels that are near the pre-recession levels,” he said.

Walden, the N.C. State economist, predicts the economic recovery will continue.  “We still have a long way to go, but things are improving,” Walden said.  He predicts that the state and national economies will expand for at least the next 18 months.  “North Carolina is expected to add over 100,000 payroll jobs in both 2013 and 2014, and by the end of 2014 the state’s jobless rate will have dropped to 6.8 percent,” he said.

Questions remains on where those jobs might land, though.

Despite recent bright spots such as the FCC plants in Scotland County, rural communities were losing low-skilled factory jobs for years before the recession. Those jobs were sent overseas.  Rural towns, and unskilled workers, will have to find a way to adapt. “There are massive changes going on in the economy that make for challenges,” Walden said. “Challenges for individuals if they don’t have the right training for the kinds of jobs that are being created. Challenges for different regions of the state.

“The rural, small-town parts of our state are the ones that have been hardest hit by the recession, as well as by big trends that have moved the economy over the last 30 or 40 years.”  Read More.