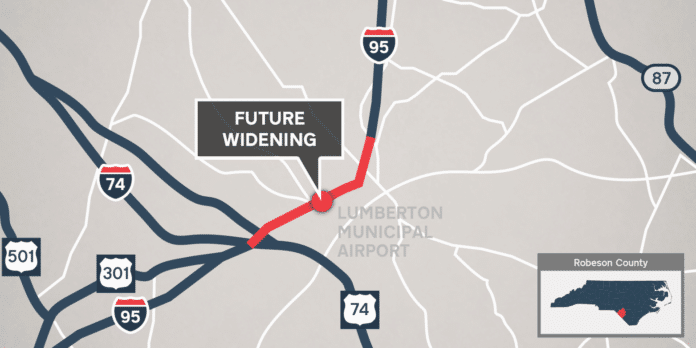 The North Carolina Department of Transportation (NCDOT) has approved a $432 million design-build contract to widen to eight miles and upgrade Interstate 95 through Lumberton.

The design-build contract went to the Morrisville-based joint venture of Flatiron Constructors Inc. and United Infrastructure Group Inc., NCDOT said in a statement.

“This modernization is long overdue,” said Grady Hunt, a state Transportation Board member who lives in Robeson County. “This vital corridor needs to be widened, but also upgraded to be more resilient against future hurricanes.”

The design-build contracting method combines the design, environmental permitting, property acquisition, utility relocation and construction under one contract. This means the contracting and design team will finalize the design and right-of-way plans before construction can begin next summer.

The project entails widening the four-lane interstate into eight lanes (four lanes in each direction) between Exit 13 and just north of mile marker 21, and replacing bridges with taller, wider and longer spans at Exits 17, 19 and 20. The existing bridges at Exits 13 and 22 are newer and do not need to be replaced, and another contract to be awarded next year will widen the interstate north of mile marker 21.

In addition, the interstate bridges crossing the Lumber River will be replaced with a higher and longer bridge, and fill dirt will be brought in for other sections to raise the interstate grade and help avoid future flooding.

Interstate 95 at the Lumber River (near Exit 19) closed twice for several days from hurricanes Matthew and Florence floodwaters.

Two years ago, the NCDOT received a $22.5 million federal grant, known as the Better Utilizing Investments to Leverage Development (BUILD) program, to help upgrade the interstate after hurricane flooding. The rest of the money to pay for the project comes from the department’s Highway Trust Fund and other federal sources commonly used for highway construction.

By the end of the year, safety improvements will be completed on the existing I-95 concrete median barrier. However, the interstate widening will not begin until next summer, when additional concrete barriers will be installed in the median and along the shoulders to create a safe work zone. The interstate’s four lanes will remain open in the daytime during construction; some lanes, however, will be temporarily reduced for overnight construction.

The improvements to these eight miles are scheduled to be completed by the late summer of 2026.