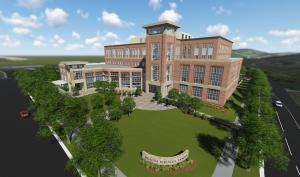 North Carolina’s Council of State has unanimously approved a resolution to sell $200 million in general obligation bonds. This will be the first in a series of bonds over the next seven years and part of the $2 billion Connect NC bond initiative approved by voters in November.

Among the projects slated to receive funds from the first $200 million bond issuance are:

According to the authorization approved by the council, final maturity of the bonds must not exceed 40 years after the date of issuance, and the fixed-rate interest rate must be capped at six percent per annum.

The new College of Health Sciences building for Appalachian State University in Boone will broaden students’ educational experience as well as the college’s reach into underserved Western North Carolina counties, the college dean has been quoted as saying in North Carolina Health News.

Gov. Pat McCrory’s office announced  that contracts have been let for 203,000 sq. ft. building. LS3P is the architect, and Rodgers is the Construction Manager at Risk.

Here is a complete list of the first year projects under the Connect NC initiative.