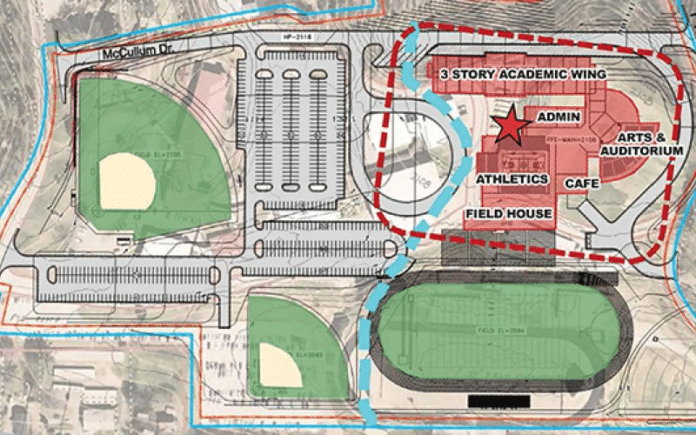 Macon County Commissioners are moving forward with consideration to build a new $70 to $80 million high school in Franklin.

The current Franklin High School downtown in the Western North Carolina community was built in the early 1950s. It “has had substantial issues over the last decade or so, with the school board and county commissioner pouring in funding every year to keep the school operational,” the Macon County News reported. “From new windows to security upgrades like fencing and cameras, every year maintenance projects at Franklin High School take up a significant portion of the school district’s capital outlay funds.”

“We’ve gone so far in the past decade, as to look out into the community, to identify parcels of land that would be conducive for a new site for Franklin High School,” he said. “Unfortunately, none of those sites were found to be perfectly favorable, and we’ve moved on from those. But it may be time to consider a new Franklin High School facility at the current site.”

Novus Architects has volunteered to create preliminary design plans for a proposed scope of work and a project estimate to replace the school. The proposal would create minimal disruption in the school year and be scheduled around the Franklin Panther football season to avoid disruption in school athletic seasons, commissioners were told.

The scope of work includes building a three-story academic building to house all classes and a two-story field house opening directly onto the Franklin High School football field, the Macon County News reported. “The project would also address the drainage and flooding issues of the football field by working with the football practice field to bring in dirt already on the campus and potentially installing underground water tanks to store water that accumulates during rains that have caused sinkholes and damage to both the parking lot, football field and track.”

“After the academic building would be completed, the proposal outlines for the existing high school campus to be demolished with baseball fields or other school amenities to be constructed in its place. “

Commissioners are set to begin their budget planning process on May 25 and agreed that if a new high school was going to be built, discussing it — and the possible need for a 5-7 cent property tax increase to fund the construction— would be appropriate during the county’s budget process, the published report says.