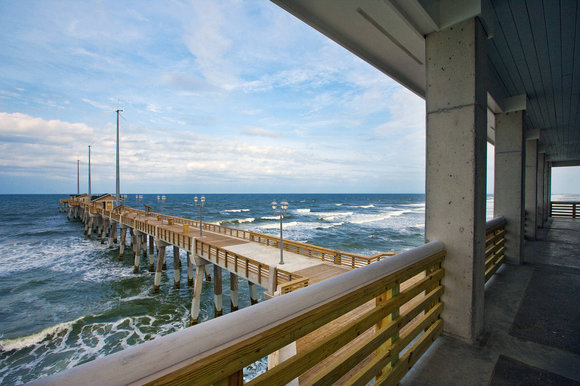 They might not have leaped tall buildings in a single bound, but the people behind the Carolinas Associated General Contractors 2011 Best Building Project Pinnacle Award showed superhero spirit.

For example, when shifting sands and pounding surf threatened to interfere with placing pilings at the Jennette’s Pier site, a high-tech solution ensured accuracy. Many workers shivered and sweated to meet deadlines for this multimilliondollar project, but their professionalism paid off.

Jennette’s Pier at Nags Head had a long and busy life. Hurricane Isabel, however, dealt it a death blow in 2003. North Carolina decided to replace the venerable wood site with a 1,000-foot concrete pier and a three-story, 17,000-squarefoot educational facility (each the largest of its kind in the state.) Plus, the new site would have three 90-foot wind turbines, solar panels, and its own wastewater treatment facility, helping it earn LEED Platinum certification.

The Wilmington division of Clancy & Theys Construction Co., a family business founded in Raleigh in 1949, was general contractor and construction manager for the project, collaborating with Bowman Murray Hemingway Architects of Wilmington. Clancy & Theys also has worked on the state’s Pine Knoll Shores and Fort Fisher aquarium facilities.

“Our whole company is very proud of this project. I know that our team worked very hard to develop ideas to make the project work from a budget standpoint,” said Scott Cutler, vice president, Clancy & Theys. “Marine construction presents some unique challenges, and it has been important to our company that our Wilmington Division has that expertise, and now also has an mpressive portfolio of experience for the North Carolina Aquariums.”

Several cost-saving decisions were made at the outset of this project, such as:

• Pre-cast concrete pier level framing.  This was chosen over cast-in-place concrete because of better cost, time and placement.

The team also decided early to construct two temporary trestle systems outward from the shore, describing them as “a roadway” for the three cranes and semi truck needed to transport and set materials. Surveyors used high-tech GPS instruments to exactly place the building and structural piles.

Combined with the challenging weather, the ever-moving ocean, and the vibrations caused by the constant pile driving operation, workers had to face the task of building 25 to 60 feet above the ocean.

The feats didn’t end there. Extra foundations were needed for the wind turbines, which were assembled on the trestle system then lifted over the water and into place by a 250- ton crane. A worker 115 feet up guided the blades into position. Work on the pier and pier house occurred simultaneously. At times there were as many as 100 workers – including tradesmen, carpenters, and artisans — on site .

Clancy & Theys says ongoing safety meetings were held, and its corporate safety director inspected everything regularly. As a result, there were no OSHA recordable or lost time incidents. Read More.