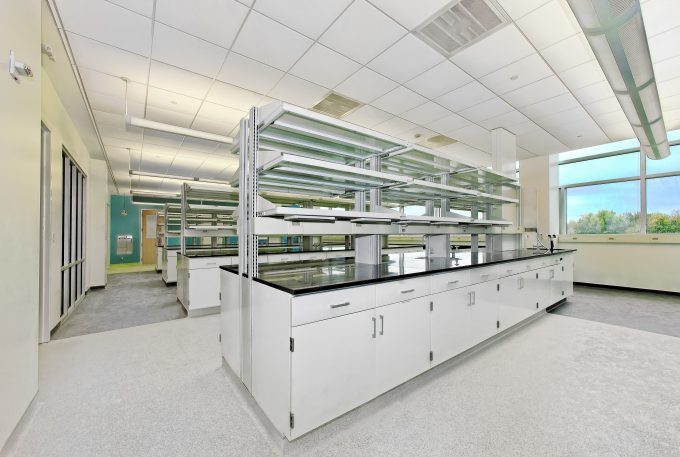 The 2012 Star Award for a project over $20 million was presented to the Joint School of Nanoscience and Nanoengineering (JSNN) by the CPN of NC.  The building was a joint venture between Greensboro based Samet Corporation, SRS, Inc., Gallatin, TN and the Barton Malow Company, a Southfield, MI firm with expertise in building laboratories and research facilities.

The contractors and subcontractors working on the JSNN Building in the Gateway University Research Park shared a sense of pride in being involved in a unique project that contributes to the vitality of the Triad area.

The $64-million, 105,000-square-foot project is a collaboration between North Carolina A&T State University and UNC Greensboro. Nanoscience is the study of molecules and atoms, and the related technology manipulates particles measured in nanometers, particles 1,000th the width of a human hair. It encompasses industries such as pharmaceuticals, biotech, aerospace, semiconductors, chemicals and defense.

In addition to serving as an educational center for students, the center will also serve as a center for research and innovation, resulting in the creation of new businesses and additional jobs for area residents.

Says Sam Kerr of Charlotte Glass Contractors, “This was a unique project that will help the region, and we were glad to be part of it. It’s cool for us to say that we were involved in it.”

At the peak of construction, there were about 450 workers on site, and 96% of the subs were from a 100-mile radius. Construction began in December 2009 and was completed two years later. It was built to meet gold LEED certification.

HDR Architecture designed a glass-and-steel structure that manages to exude a welcoming feel. The focal point of the structure is an egg-shaped auditorium – which seats up to 232 – visible to the public through floor-to-ceiling glass walls.

“The biggest challenge was the time frame, and we only succeeded because we took a team approach,” says John Merrill, executive director of the park. “For example, the construction team met every Friday morning, and that kept everyone on the same page.”

Helping the project move quickly and efficiently was the extensive use of Building Information Management (BIM). Says Samet’s Ken Grube, “This project had so much piping and ductwork, if we hadn’t coordinated with BIM, we would still be building it right now. It eliminated conflicts and kept track of changes. This was a textbook example of the value of using BIM for a project.”

Because of the nature of the work, even the most basic building systems were far more complex than for typical commercial buildings. This included process piping, electrical, plumbing, HVAC and chillers. To meet stringent vibration-canceling requirements, the facility was anchored on bedrock.

Commissioning WorCx, Jamestown, NC was the commissioning agent for the chiller plant for the new JSNN building. President Tom Foster, Jr., PE was engaged by the owner to ensure the facility was operating in an energy efficient and sustainable manner. Envelope commissioning was also done to evaluate the building envelope to insure the skin components worked effectively to repel moisture and save energy. Grube describes the 7,000-square-foot clean room as a “hospital on steroids.” To minimize any contamination, people working inside the room as it was being built wore haz-mat suits.

Those working on the sophisticated building never lost sight of the importance of what they were doing. “The Joint School is state-of-the art for the east coast,” says Foster. “Nanoscience is an emerging science and the Gateway University Research Park will attract professionals and start-up companies to the Triad area. Plus students from UNC-Greensboro and NC A &T State University can now learn and work in a world-class educational and research facility.”