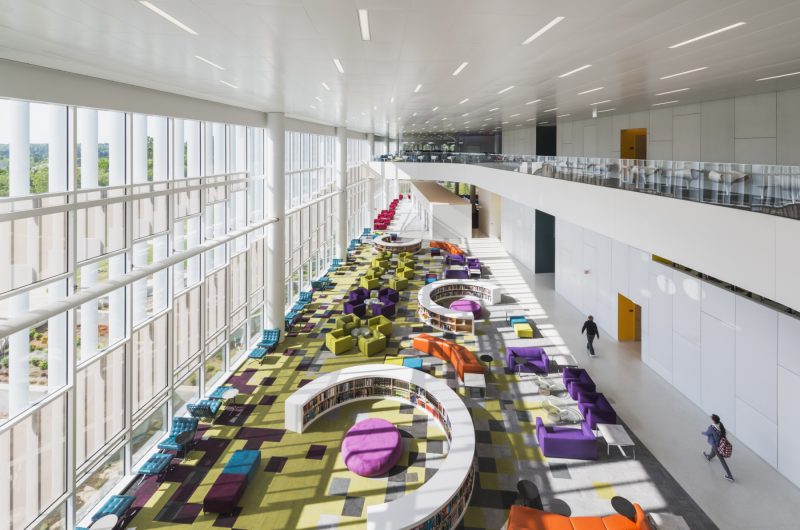 NC State University’s James B. Hunt Jr. Library has received the 2015 Architizer A+ Popular Choice Award for educational libraries in the typology category. Designed in collaboration by the NCSU Libraries, Snøhetta, and Clark Nexsen, the Hunt Library was the only U.S. library named as a finalist. 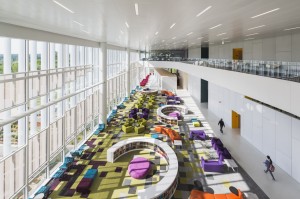 Since opening in 2013, the Hunt Library has strengthened NC State University’s position as a leader in innovative education and research. The library offers students and faculty an incubator for new technologies, modes of collaboration, and approaches to learning and research. The library provides access to 35,000 books on open shelving, while an Automated Book Delivery System (ABDS), or bookBot, allows the NCSU Libraries to store up to two million items in one-ninth the space required by traditional shelving. As a result, the majority of its square footage can be devoted to collaborative study rooms, open seating areas, and transformative technology and visualization spaces.

The Architizer A+ Awards winners were announced on April 14, 2015 and will be recognized at a gala in New York City in May, where they will receive a complimentary copy of the annual book of all A+ Award winners, published by Phaidon. Now in its third year, the global architectural awards program recognizes excellence and identifies industry leaders for architecture and design worldwide. While entries were received from more than 100 countries, only five entries in each category were named finalists.

To learn more about the Architizer A+ Awards, please visit http://awards.architizer.com/about/awards.