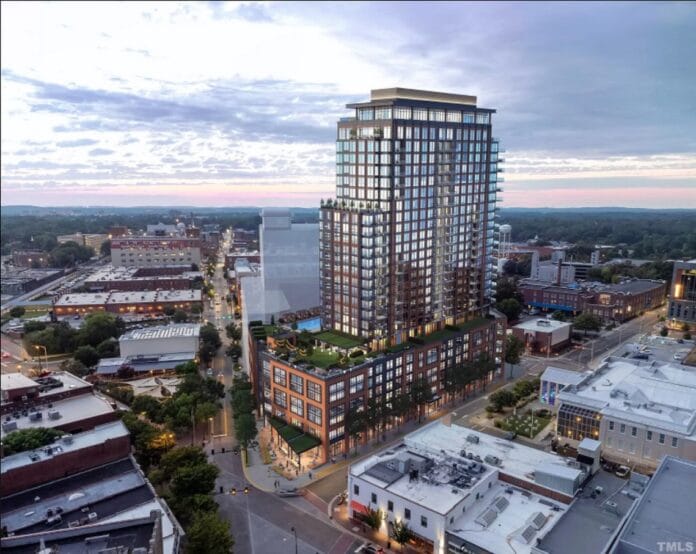 Construction should start this month on The Novus between Main and Morris streets.

“It is so exciting to be a part of that,” Jane Hills, the development company’s co-founder, told The News & Observer in a story published on May 31. “We love to create different types of buildings that have a purpose, and that are part of building a community.”

The new structure is on the site of the former South Bank building, which was demolished earlier this year after more than a half-decade.

The published report explains that under the city’s current 300 ft. height limit, Durham skyscrapers can’t be taller than 27 storeys. The same developer built the first structure in the city to reach the limit, One City Center.

“For us anyway, this is ample amount of room at this point in time for us to do what we’re doing,” Hills said. “Will there be something taller in Durham? That’s certainly possible. I mean, Raleigh has kind of gone to a whole other level.”

There are plans for a third 27-story building. Chapel Hill’s East West Partners is preparing to redevelop the downtown YMCA. “We might have been able to go one story higher, but we were kind of limited by what we could park,” project manager Ben Perry said in an interview with the News & Observer in May. The redeveloped YMCA is expected to break ground later this year and be completed in 2025 or later, the published report says.

Meanwhile, at The Novus, the developer plans to construct 54 condominium units, 188 apartments and ground-floor retail. “We really wanted to combine rentals with condominiums,” Hills said. “For us, it’s all about building a place. It’s all about how people interact and we didn’t want to have an empty condo building.”