Twenty-year old Christian Kluttz of Mount Pleasant took home a significant cash prize, a truckload of new tools and the “David R. Sigmon Award.” Kluttz was among fifty apprentices from thirteen NCMCA member firms participating in the contest hosted by Adams, an Oldcastle company at their Colfax facility on May 21. 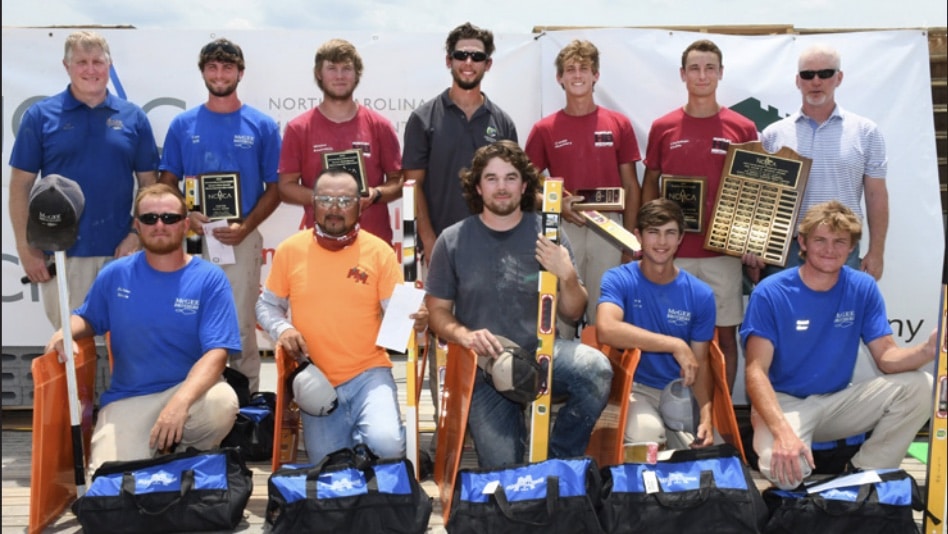 Contestants had two hours to construct a predetermined panel project, afterwards judged by a team of journeyman masons for plumb, level, production, correct design, range and other criteria. The two-hour time limit makes the Sam McGee among the most challenging apprentice masonry competitions in the country. Most such competitions allow at least three hours to build similar projects.

Scores ranged from 13 to 21 for the top-10. (Scoring is based on “deductions” so low score wins.) A three-way tie at the top was settled with “plumb” scores as the tiebreaker.

New Champion Christian Kluttz is the son of Kima and David Kluttz. His interest outside of work are doing side jobs on the weekend and working out at the gym. Christian says, “Previous national masonry champion Daniel Furr, who was like a second brother to me growing up, is the sole reason I got into masonry in the first place because he made it look so cool. My hope for the future is to run a crew for Huntley Brothers.”

Christian says his favorite quote is from Proverbs 14:23: “All hard work brings a profit, but mere talk leads only to poverty.”

Kent Huntley of Huntley Brothers Company, himself a previous winner of the contest (1986,) says, “Christian works with Rex Huntley’s crew and does an excellent job for us. In addition to having tremendous (passion) for masonry.”

The annual contest is named in memory of Sam McGee. Samuel Alexander McGee (1939-2015) was cofounder and president of McGee Brothers Company in Monroe. Recognized as an innovator in the industry, Sam was inducted into the Masonry Contractors Association of America “Hall-of-Fame” in 2014. He was inducted into the National Masonry Instructors Association “Hall-of-Fame” in 2012 and was among the first individuals to earn the designation “Certified Masonry Executive” in the NCMCA Masonry Contractor Certification Program. He had a passion for the masonry industry and for encouraging and teaching young people craft skills, especially masonry.

The apprentice that finishes with the top score in the contest is presented the “David R. Sigmon Award” as first place finisher of the annual event. The award is named in memory of David Sigmon, a journeyman mason from Hickory who passed away in 1998 while serving as NCMCA president-elect and who had been active in promoting this contest and other programs around the state to recruit and develop young craftsmen for masonry careers.

The 2023 Samuel A. McGee Memorial Masonry Apprentice Skills Competition is set for Saturday May 20, 2023 in Kinston co-hosted by The NCMCA Eastern Carolina Chapter and EastWest Products.

The NCMA has some 150 member firms across the Carolinas. NCMCA promotes masonry as a great career option and as the building material of choice.