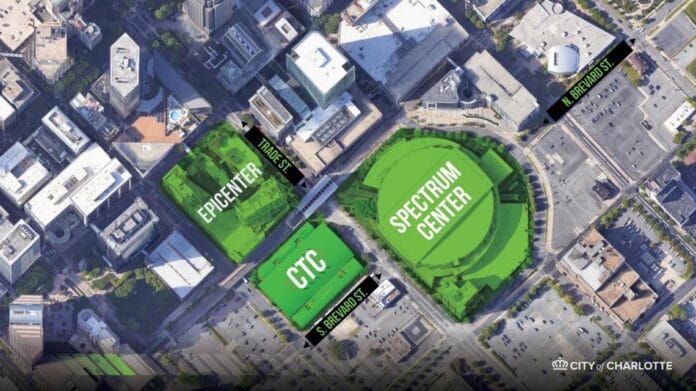 The City of Charlotte plans to spend $275 million to upgrade facilities for the NBA Charlotte Hornets team.

The work to start this summer includes $215 million in upgrades to the Spectrum Center and a $60 million new practice facility.

The Charlotte Observer reported on May 31 that construction is expected to begin this summer and take four years.

The Spectrum Center renovations will be funded from municipal tourism revenue (such as from the rental car sales tax or hotel occupancy rate tax) and won’t impact the city’s general budget, says the city’s CFO Teresa Smith.

“We did not disregard the wants and needs of our other facilities,” Smith was quoted as saying.

The practice site will either be built on an existing gravel lot besides the stadium, or it will replace the Charlotte Transportation Center. This work will be funded from naming rights for a proposed new entertainment district.

If the practice facility is built in the existing transportation center, the bus facility would be moved underground, the published report says.

“The proposed renovations plus the potential sale of the Epicentre generated excitement for Charlotte assistant city manager Tracy Dodson and Charlotte Hornets president Fred Whitfield, who say the two could be the catalyst needed to jump-start an entertainment-focused district in Uptown Charlotte,” the Observer reported.