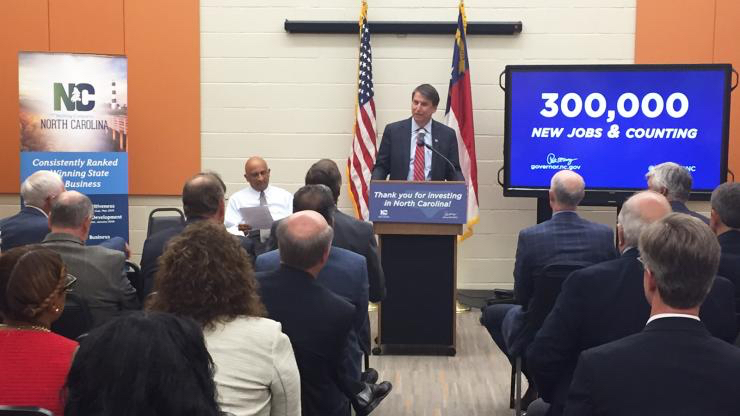 Prescient Co. designs, manufactures and installs prefabricated posts, panels and trusses made from light gauge steel. The materials are used to build apartments, hotels and other buildings. The company expects to receive $2 million in North Carolina Job Development Investment Grants (JDIG) over 12 years if it meets its hiring goals and invests $18.8 million in the planned facility.

The Economic Investment Committee of the NC Department of Commerce recently unanimously approved the financial incentives.

“Developers, architects, engineers and general contractors in the multiunit housing industry are seeing the benefits of our platform, and this facility will allow us to efficiently service our customers up and down the I-95 corridor from Maine to Miami by being closer to their markets,” Prescient CEO and president Satyen Patel said in a statement issued by the governor’s office. “The demand for our system across the mid-Atlantic, the south and south eastern U.S. continues to grow, and we are looking forward to a long and productive partnership.”

Prescient’s arrival in Alamance County will be facilitated, in part, by a JDIG approved by the state’s Economic Investment Committee. Under the terms of the company’s JDIG, the company is eligible to receive up to $1,964,700 in total reimbursements.

Payments will occur in annual installments over 12 years pending verification by NC Commerce and Revenue departments that the company has met incremental job creation and investment targets. JDIGs reimburse new and expanding companies a portion of the newly created tax base with the goal of increasing the overall tax benefit to NC.

The headquarters will be at the North Carolina Commerce Park, a 1,200 acre business property developed by Alamance County and the towns of Graham and Mebane.

Prescient was founded in 2012 and has 270 employees. About 70 of them are based in Krakow, Poland, the company’s software development center.

Privately held Prescient is backed by about $45 million in investment capital, Patel said. The company increased its revenue eightfold to $40 million last year and expects to reap $52 million in sales this year and $127 million in 2017, he said.

Prescient is planning to develop an operations center in Texas identical to the one planned in North Carolina, Patel said.

The company assembles the building sections “on site to make a final building,” Patel said. “Our own software drives the manufacturing process.”

Projects include 45 Asheland apartments in Asheville and Pier 33 apartments in Wilmington, with several others under development, he said.

Prescient produced 1.2 million sq. ft. of construction in 2015, three times as much as the company built in 2014. This year Prescient expects to build 2 million sq. ft., he told Raleigh News.