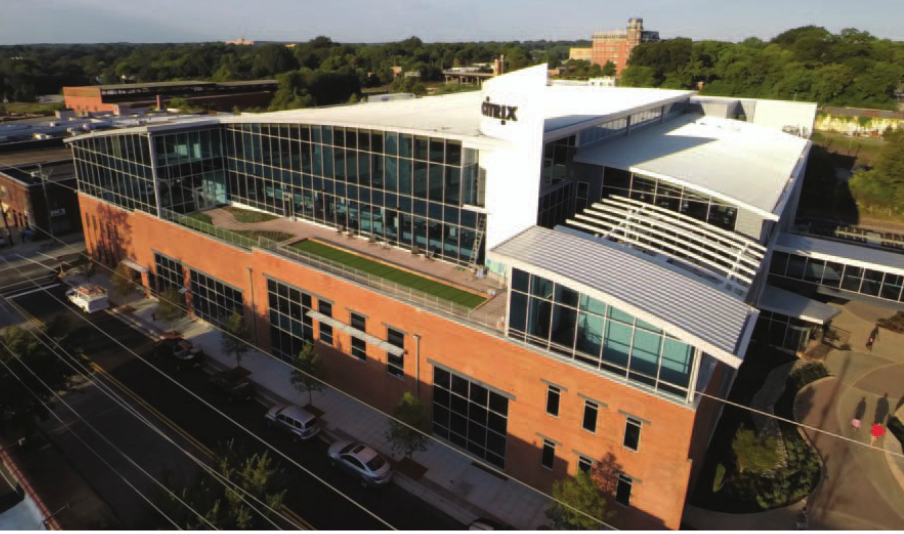 Although it only opened a short time ago – in September 2014 – the Citrix office headquarters in Raleigh is already making a profound and multi-layered impact, which only promises to increase as time goes by.

The winner of the 2015 Triangle CREW Champion Award for best redevelopment project is considered a prototype of what office buildings will look like in the future as they are transformed into highly sophisticated high-tech places were Millenials will want to work – and play.

In addition, as the first office renovation in Raleigh’s burgeoning revitalized warehouse district, it has set the tone and created benchmarks for everything that follows – which already includes about a dozen new projects in various stages of development.

But the project has also created an unexpected consequence, also with far-reaching implications. Steve Rice, owner of California-based RCI Builders, Inc., the project’s general contractor, was so impressed with the way the Citrix project came to fruition that he opened an office in Raleigh to get more business in North Carolina. Plus he bought a condo just a block away from the Citrix building and plans to live in the city part-time.

“It was a true labor of love among the players – we developed a synergy to create a workspace that changes how people work so they work better and live better,” Rice says. “In California, the bureaucratic process often becomes antagonistic, but here the city and building officials were phenomenal to work with. They saw the project as an asset to the city, something they wanted done. They didn’t throw up roadblocks. It’s why this city is booming.”

The vision of transforming the Dillon Supply Warehouse into a cutting-edge workspace for the twenty-first century started in the imagination of Steve Nicholson, Citrix’s senior director of real estate strategy and operation.

“We looked at what the bones of the building offered – there was no AC, no heat, no fiber optic – it was just an empty frame,” Nicholson says. “But we still wanted to keep the integrity of the architecture and the district intact.”

“We also wanted to create a high value for the user experience,” he adds. “We knew we were building for Millenials – the average age of our worker is 27. So we don’t have the typical vertical high-rise arrangement. You can see and hear people on other floors. It’s open so people get the natural buzz of seeing and hearing others’ activities. It creates a great energy and vibe – it’s a cool place to work.”

The final product is a wonder to behold. In 21 months, the design and construction teams took a two-story, 64,000-sq. ft. abandoned warehouse and turned it into a four-story, 188,000-sq. ft.  next-generation workspace designed, in the words of Citrix’s marketing materials, “to stimulate creativity, collaboration, productivity and employee engagement.”

To achieve that, they created an amenity-rich building that features a storage facility for 80 bicycles, a yoga studio, basketball and racquetball courts and a fitness center. The cafeteria is home to a pizza oven made from a boiler unexpectedly found among the warehouse debris.  (“Now that was fun!” Rice says.)

The most outstanding feature is a conference area made from old shipping containers accessible via a glass elevator. Their tables are made of railroad ties.

Among the many features that are expected to help the building earn Gold LEED Certification is a green roof and a 55-ft.-long living wall covered in vegetation. Twelve overhead cranes were in the building when the renovation began; two were kept “for an architectural statement to create a multi-sensory feeling of ‘wow,’” Rice says.

Santa Barbara-based Citrix, a 25-yeard-old company with annual revenues of about $3 billion, touts itself as a leader in mobile workspaces, providing visualization, mobility management, networking and cloud services that create new ways to work better. Consequently, it was vitally important that the firm’s new Raleigh office uncompromisingly reflect its brand position in the marketplace.

Investors own the building, and Citrix has a long-term lease with them. Neither group is divulging the renovation’s cost; Nicholson calls it “a sizeable investment.”

It all started when Citrix purchased a local firm, ShareFile, in late 2011 and acquired a Raleigh presence. Once the company decided to stay in Raleigh and had pretty much committed to adaptively re-using the old warehouse, Nicholson met with architect Phil Olson, a principal with Washington, DC-based Alliance Architecture.

“It was an exciting partnership from the beginning,” Olson recalls. “We had our first meeting where Steve laid out his vision, and I went back to my hotel room and did some conceptual drawings. That was basically what got built. All of it was driven by accommodating the new work style of the under-30 workers. It raises the bar in terms of progressive design.” (Alliance is now designing projects for Citrix across the U.S.)

But the vision came up against reality very quickly, and it took technical savvy, collaborative creativity and outside-the-box thinking to adapt an old structure to the needs of the twenty-first century. For example, the existing structure was built in four phases over a long period of time, and each one used a different structural system with different elevations and roof and floor heights. Seven different building permits were required to complete the project.

“That made it extremely complicated,” Olson says, “which was made even more so because we wanted to keep as much of the original as possible. RCI was superb. By working in a team-oriented collaborative way, we solved problems together.  We couldn’t have done this without a strong  team.”

The job required some 69,000 worker hours as well as 7,000 cubic yards of concrete, 490 tons of steel and nearly 262,000 sq. ft. of dry wall. More than 30 subcontractors were used, including SteelFab, Newcomb & Company, Crawford Sprinkler, Performance Glass, Metromont Corp., Precision Walls, Baker Roofing, Sir Raleigh Electric, Furbish Studio, Morrison Engineers and Northside Cabinets. Their work was overseen by RCI’s staff of 17; the company got its North Carolina GC license in the summer of 2012.

Adding further to the complexity of the renovation was Citrix’s growth. When the company acquired ShareFile, it had 80 employees in Raleigh; now it is expected to have 850 by the end of 2015.  When it successfully applied for state and local incentives (totaling more than $9 million) before the project began, it had committed to adding 337 new jobs.

As a result, the original design was much smaller and less ambitious, with plans to add an additional 55,000 to 60,000 sq. ft. about three to six years down the road. Instead, four months into the project, Citrix pulled out all the stops and incorporated that additional space into the current project.  “It complicated the design and budgets, but it did not affect the delivery date,” Rice says.

Nicholson, Rice, Olson and other key team members met regularly using a Citrix product, ‘GoToMeeting.’ They were even able to see the condition of the site in real time through the use of a hand-carried, camera-enabled iPad. But they still all met face-to-face in Raleigh about every three to four weeks.

“There was no template to follow – everyone had to be adaptive and nimble-minded,” Nicholson says. “The team pulled together tightly, there was a lot of trust. We sharpened our pencils every day. That kept the project special – and on time.