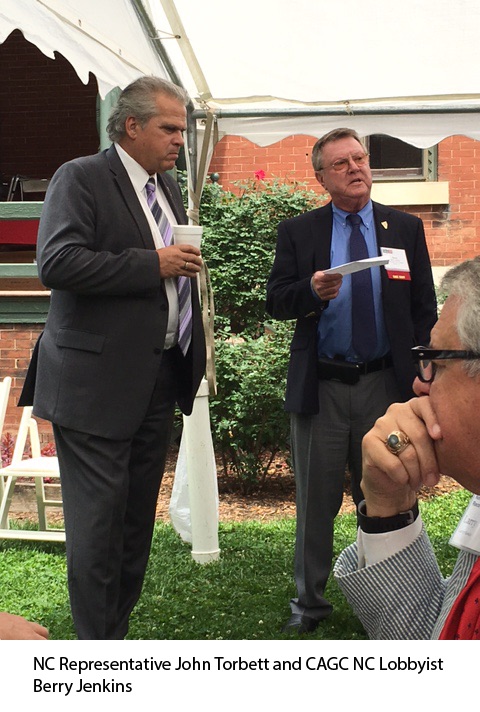 More than 100 architects, contractors, engineers and affiliates gathered for the construction industry’s annual legislative day at the NC state capital on May 11, the Carolinas Associated General Contractors (CAGC) reports.

Sponsored by AIA/NC, Carolinas AGC, ACEC/NC and the Professional Engineers of NC, the groups had a smaller legislative agenda this year given the significant accomplishments from last year and this year’s short legislative session which is focused primarily on adjusting the second year of a biennial budget

CAGC says participants were asked to thank legislators for the additional transportation funding added in last year’s budget and for their support of legislation that placed the $2.0 billion bond package on the ballot for a vote. The bond package was overwhelmingly approved this past March.

“Additional legislative priorities supported by the industry include repeal of the $500,000 cap on light rail projects and the need for more funding for building repair and renovation. Two bills have been filed supporting the repeal of the light rail cap and funding for repair and renovation of public buildings could be included in the House budget which is expected to be voted on later this week,” the report said.

Rep. Bill Brawley, the Republican finance chair in the House, spoke about tax reform and the positive economic outlook for North Carolina, stressed the need to continue to keep “politics out of transportation.” He also praised the industry for “doing what you do so legislators don’t have to.”

Senator Chad Barefoot spoke about his various roles in the Senate co-chairing the Blue Ribbon Study Commission on Infrastructure, the Senate Higher Education and Education Appropriations Committees and the Joint Legislative Workforce Development committee. Rep. Dean Arp, a Republican from Union County, who also co-chairs the Blue Ribbon Study Commission and the Capital Appropriations Committee, thanked the organizations for their support of the Connect NC Bonds but reminded the audience that we have to keep moving forward since significant infrastructure challenges remain. Rep. Arp was particularly mindful of the significant backlog of repair and renovation needs but stated that a detailed plan for spending the money has to be in place before legislators will support it, CAGC reports.

The legislative briefings and presentations at the AIA building were followed by lunch at the Lt. Governor’s Mansion where Lt. Governor Dan Forest welcomed the group and commended attendees for being advocates for the industry.

Following lunch, participants visited with legislators in their offices and sat in on the House and Senate legislative sessions later that day where they were officially recognized in each legislative chamber and asked to stand. Page Kluttz, with Hodgin Construction, remarked on how gracious and accommodating legislators were to her saying “the legislators I met really seemed to understand our issues and appreciate our visit.” For more info, contact NC CAGC lobbyists Berry Jenkins, Betsy Bailey, Allen Gray and Dave Simpson.