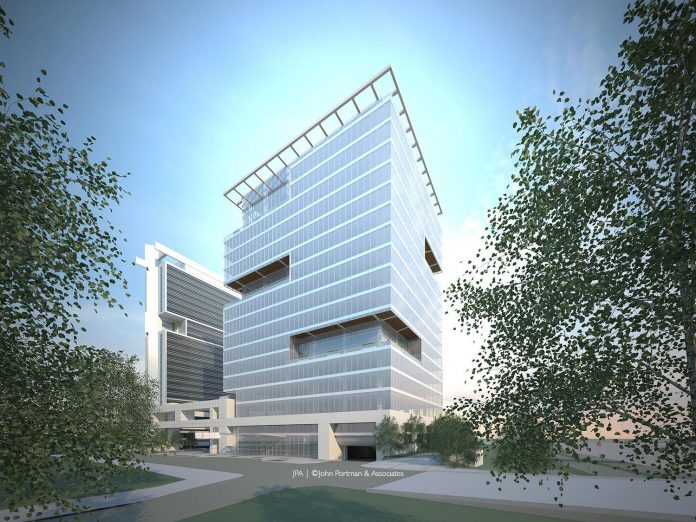 Set to be completed early in 2017, the 18-story tower will add 370,000 sq. ft. of office space once completed. The tower is being constructed by Holder Construction.

Built on top of the parking garage of an adjacent Westin hotel developed by Portman in 2003, it was reported that “crews had to drill more than 9,000 holes in existing columns and slabs, as well as add 288 micropiles, to reinforce existing infrastructure to support the tower” over four months of work around the clock.

The paper quotes John Ball, senior leasing agent at Trinity Partners, as saying leasing interest from a mix of out-of-market and local traffic as well as varied industries has been good. “One of the realities when you’re one of the new buildings (is that) everyone wants to come take a look at the shiny new car, so that’s been fun. But I think it’s real activity.”

Connectivity to the Lynx Blue Line Stonewall Station and Crescent Communities’ project have been cited as generating at least some of the interest.

Part of what made the speculative project feasible was the 1,500-space parking garage already built during The Westin’s development. The office project has eliminated about 150 spaces, but still leaves a ratio of about two spaces per 1,000 sq. ft.

“Building garages is extremely expensive and the rent that you typically get off the garage doesn’t offset the returns,” he said. “Having the garage already here is one of the reasons we were able to go spec and afford it. It would have been a very tough thing to do otherwise.”