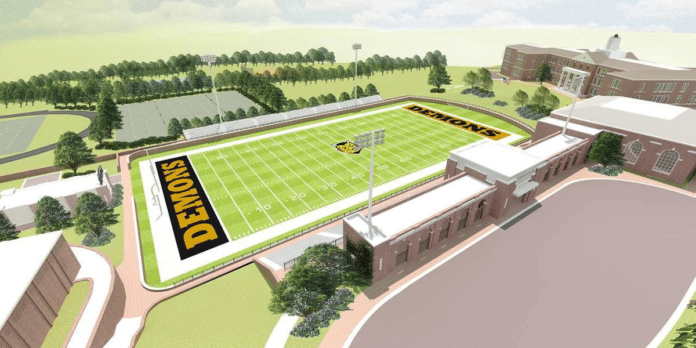 The Winston Salem/Forsyth County Schools school board has approved spending $2.1 million for a practice field at a local schools complex, representing an increase in costs of more than $1.2 million from the original budgeted amount, The Winston-Salem Journal reports.

The school board had approved in September spending $895,000 for the practice field serving Reynolds High School and Wiley Middle School on school district property adjacent to Hanes Park.

However, at a board meeting on Feb. 15, Darrell Walker, the school district’s assistant superintendent of operations, that the practice field site would need to be shifted if it’s to be the future site of a full football stadium.

The location change means the practice field will require a retaining wall, adding $1.2 million to the original costs. The published report says the district plans to come up with the extra funds by reallocating nearly $400,000 designated to pay for a field at Parkland that the state has now agreed to fund; $350,000 in savings from a facilities audit that came in under budget; and $456,000 in savings.

Walker said that staff members didn’t initially realize a retaining wall would be needed. It makes sense, he said, that if the practice field ever becomes part of a stadium, that the playing field is already in the proper location.

When it comes to building the full stadium, the non-profit Home Field Advantage is raising money to pay the costs. Walker told the board members that the group has pledged to raise money for turf and eventually a storm water management system for the practice field.

Home Field Advantage spokesman Stan Dean told the Winston-Salem Journal  that  the group will be able to cover the project’s remaining costs including bleachers, rest rooms and a concession stand.

“We do not intend to ask for any additional funding,” Dean said. “We believe what they’ve given us is very generous, and we can handle the rest.”

If all goes smoothly with construction of the field, Dean said Reynolds teams may be able to starting playing games at the field by Spring 2023.