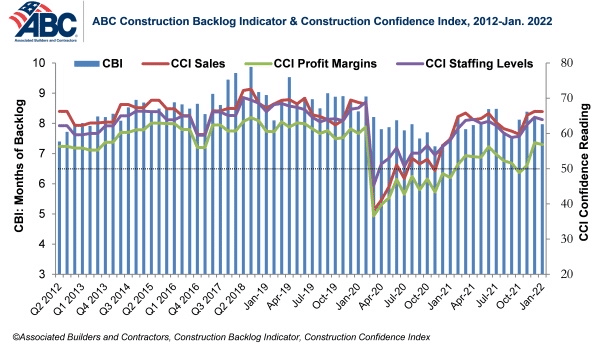 Associated Builders and Contractors (ABC) reported on Feb. 15 that its Construction Backlog Indicator declined to 8.0 months in January, according to an ABC member survey conducted Jan. 20 to Feb. 4. The reading is down 0.2 months from December 2021, but up 0.5 months from January 2021.

ABC’s Construction Confidence Index readings for sales, profit margins and staffing levels all inched lower in January. All three indices remain above the threshold of 50, indicating expectations of growth over the next six months.

“The last two months have indicated declining backlog, but the dips are not cause for particular concern,” said Basu. “Declining backlog indicates that some projects are postponed or canceled in response to rising costs and/or extended delivery timelines. The principal challenge for contractors remains a lack of sufficiently skilled labor, a structural issue that will not go away soon and a circumstance contractors have dealt with for years. The situation is likely to deteriorate further as federal infrastructure dollars begin affecting the economy more forcefully in the near future.”