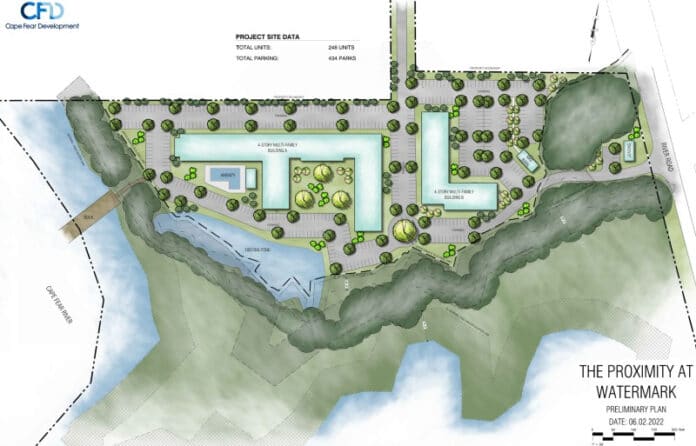 Officials with Cape Fear Development, an affiliate of Cape Fear Commercial, say in a news release that rezoning applications for the sites will be submitted to the city of Wilmington for review.

The company wants to rezone 7.4 acres of former industrial land directly south of the Cape Fear Memorial Bridge and a portion of a separate 40.4-acre site, currently occupied by Watermark Marina at 4114 River Rd., WilmingtonBiz.com reported on June 7.

The rezoning applications seek classifications for apartment communities with green space, multi-use trails and an integrated riverfront, the statement says. 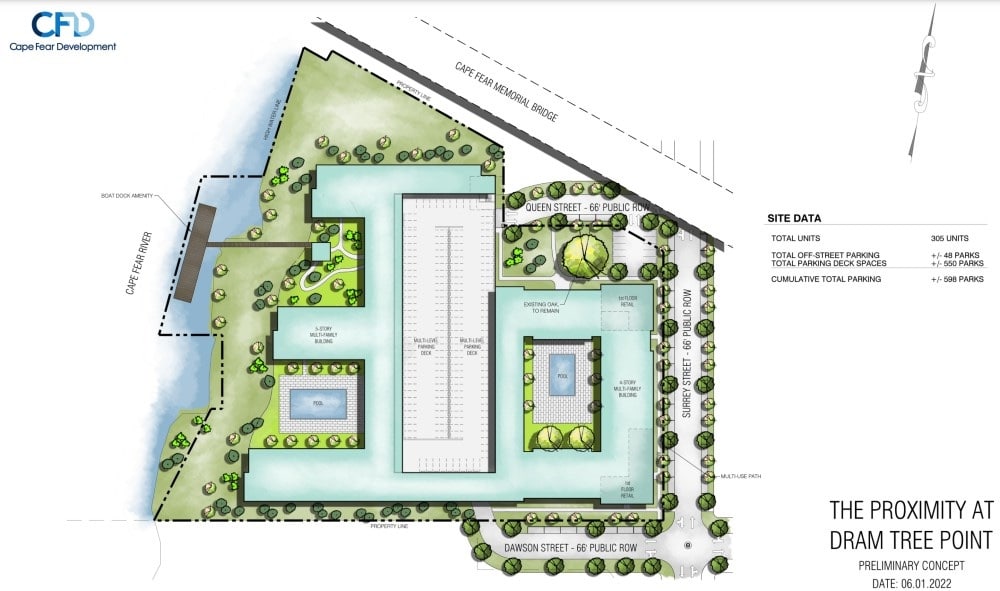 “Both sites are located on the Cape Fear riverfront and have previously been built upon. Considering their current condition, these parcels are ideally positioned for environmentally responsible infill developments that celebrate Wilmington’s history and deep-rooted connection to the Cape Fear River,” the release said.

At the end of Independence Boulevard off River Road, Cape Fear Development officials want to build The Proximity at Watermark with two four-story structures that would hold 248 apartments, the business news website reported, citing the news release.

“Rather than encroaching onto undeveloped wetlands near the riverbank, the design has utilized the site’s current concrete footprint to minimize environmental impacts,” the release says.

The 7.4-acre site next to the Cape Fear Memorial Bridge is currently zoned for light industrial uses “that are no longer appropriate for the vibrant and evolving southern core of downtown Wilmington,” the developers say in their statement. “Following the exit of industry, the land has remained vacant for many years, with concrete remnants that have fallen into disrepair.”

This project, The Proximity at Dram Tree Point, would include a five-story structure with 300 apartments and about 5,000 square feet of retail space.

“Project costs for The Proximity at Dram Tree Point will include significant traffic and landscaping improvements at the base of Dawson Street and along Surry Street — linking together local neighborhoods and commercial hubs under the backdrop of the Cape Fear River,” the release says.

Local architectural firm LS3P is designing the projects. A brownfield agreement has been put in place to guide the development of the Dram Tree site, the statement says.

“We believe an infill development with a design that honors the history of the riverfront is the best use of these sites, rather than seeing them left as another vacant lot, or occupied by an industrial facility,” Brian Eckel, Cape Fear Commercial co-founder and a Cape Fear Development partner, said in the statement.

The projects will be managed and financed by Cape Fear Development, which will be in charge of permitting and construction. The release says the firm’s new construction affiliate, Cape Fear Construction, can direct the build-out entirely in-house.