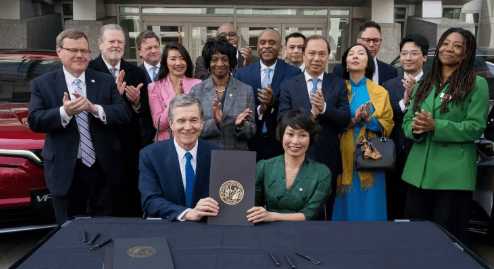 Vietnamese EV maker VinFast has received $1.2 billion in incentives to build a factory in North Carolina.

The incentive package represents the state’s largest-ever economic development project and its aspirations to build North Carolina into a hub for the clean energy economy.

Construction on the 2,000-acre site at the Triangle Innovation Point in Chatham County, will start in the second half of the year. VinFast said it will begin building cars there in July 2024, ramping up to an annual capacity of 150,000 vehicles.

VinFast will be joined in North Carolina by Toyota, which is building a $1.3 billion battery plant near Greensboro, scheduled to begin production in 2025. The Japanese automaker said its first-ever U.S. battery factory will supply 1.2 million EVs annually, toward its goal of selling eight million EVs annually by 2030.

VinFast also said that it will grow its U.S. presence with six stores in California, starting with Santa Monica. Other locations include La Jolla, San Diego and San Mateo.