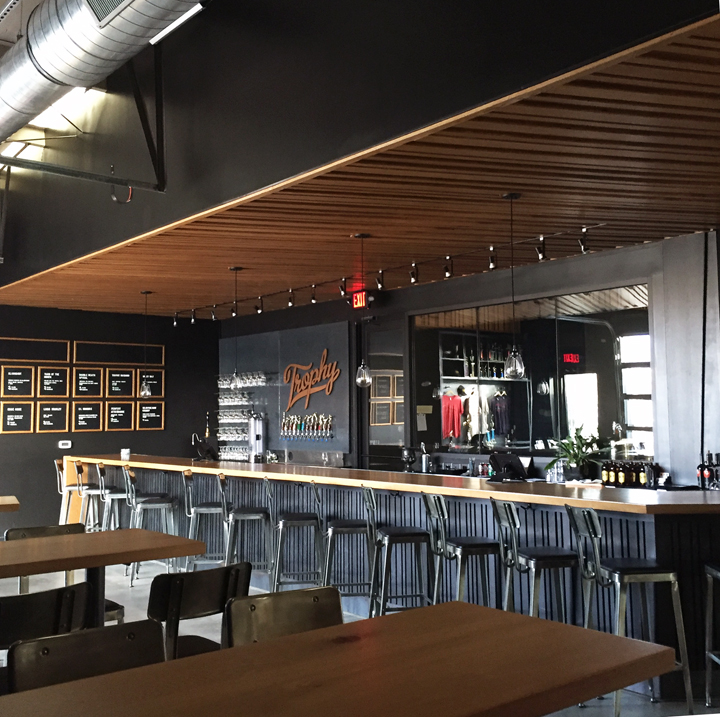 The Raleigh Architecture Company (RACo) recently completed the design and construction of Trophy Brewing & Taproom at 656 Maywood Ave. in Raleigh following the success of the firm’s design for the smaller State of Beer bar and bottle shop that opened on Hillsborough St. in 2014, the practice said in a news release.

In the brewery, three single-batch fermenters and three double-bath fermenters provide approximately 180 barrels of fermentation space. A reinforced foundation slab supports the weight of the equipment. The partners also had to enlarge the structure’s gas and water supply systems and install extensive floor drainage systems.

Johnston said in a statement the design scheme is “reminiscent of the exterior versus interior of wine and bourbon barrels used in the aging process: The exterior is left natural and the internal is charred to enhance flavor.”

The natural and black-stained oak overlap at the 16-seat bar “where you experience the beer,” he said. The partners also specified metallic gold paint to recall the gold or bronze sheen of the facility’s namesake: trophy.

The architect of record for Trophy Brewing & Taproom is David Mauer with RACo serving as design architect and the related Raleigh Construction Company as contractor.