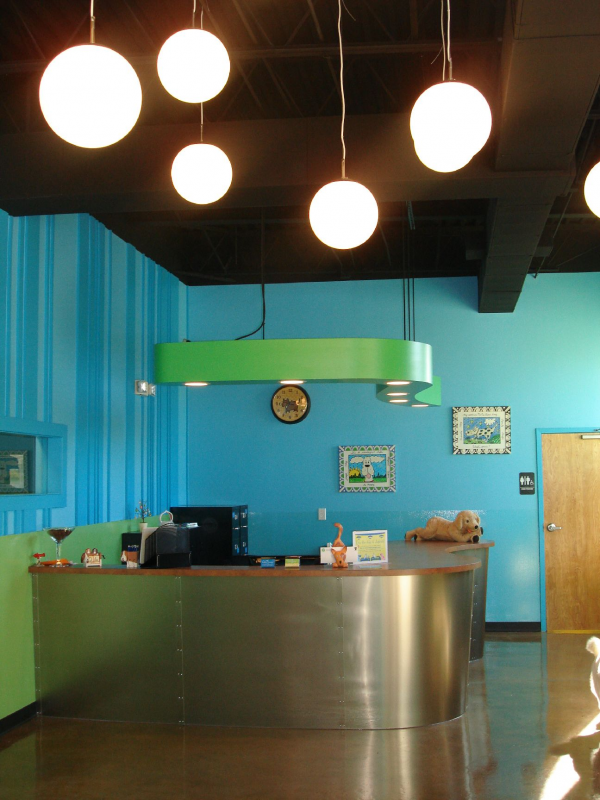 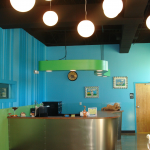 Sometimes, man is dog’s best friend. The proof of this statement is found in The Barker Lounge on Montford Drive in Charlotte, which opened in April. This facility is very specifically made for canine wants and needs – and bears no trace of its former life as a retail site. The lounge (which describes itself as a “hangout for dogs” and whose playful logo depicts a bone-shaped treat in martini glass) offers daycare, boarding, grooming and training. It’s one of five franchises of a New Jersey-based business; the others are in New Jersey, Pennsylvania, Georgia and Tennessee. The local owner is Mindy Evans, who’s a certified Pet First Aid and CPR instructor.

The Montford Drive site was great for Evans because it was visible, near a neighborhood and a park – two big sources of dog-owners — plus it offered a building good for office and other indoor functions and land for assorted doggie outdoor functions, says Jennifer Orman, of commercial general contractor J.D. Goodrum Co. of Cornelius. Orman collaborated early steps, such as a zoning regulations and the building-permit process– with Barker executives, Lake Architectural of Marcellus, New York, and Mecklenburg County officials. All parties wanted to ensure the dogs could romp outdoors without safety and noise concerns. The site was zoned correctly, but regulations “were very restrictive for a doggie daycare,” says Jamie Yoxtheimer, vice president of JD Goodrum. “This was more challenging than typical but not a problem,” he says.

Goodrum is a 25-year-old firm which specializes in commercial construction projects including industrial, retail, office, warehouse, religious, institutional and recreational markets. You can see its work at, for example, Pine Island Country Club, Griffin Brothers Tire and Automotive Center, and the Westmoreland Athletic Complex. And the Barker Lounge is not Goodrum’s first client whose end-users would include animals. “We’ve completed other animal facilities in the region,” Yoxtheimer says.

The $200,000 demolition and renovation project began in January and took about eight weeks. It was finished on time and within budget. Requirements included inside play areas, kennel and grooming areas, a modern lobby with a feature walls and staff areas, and outside play area. Altogether, the site is a little under 10,000 square feet.

Because The Barker Lounge is a franchise, extra attention was paid to the signature blue and green colors, to ensure continuity. The feature wall seen upon entering, for example, has a lot of wood detail and showcases the corporate logo.
Nick Vrettos of Vrettos Pappas Consulting Engineers, says his firm collaborated with the architect on ceiling clearances for exhaust fans in the interior playrooms. The building’s plumbing needs were rather simple. But “we had to do a little homework” on the electrical work for the building, checking with Duke Energy to estimate the original tenant’s load profile and justify the Barker’s new loads. The building had been abandoned for a while, so research was needed, he said. Vrettos and childhood friends Kosta J. Pappas and Dino M. Pappas started their firm (http://www.vpce.com) about eight years ago. They specialize in constructing new buildings, renovating old buildings, up-fitting existing building and tenant spaces, and analyzing/upgrading existing engineered building systems.

Floors were a concern because, like Vrettos found with the electrical load details, prior use and abandonment of the building had to be taken into account. “There was lots of floor prep…the existing concrete floor had to be prepped and re-sealed,” Yoxtheimer says.
“The floor was in a very poor condition. It was an old porous floor with several layers of glue and thinset,” says Jeroen H.F Kaijser Bots, owner of EUROfloors of Huntersville. EUROfloors’ expertise is concrete staining & epoxy. Kaijser Bots has been working in the commercial flooring & design field for about 15 years, both in the U.S. and the Netherlands. His experience includes commercial clients like Nike, Wake Forest University, Toyota, Nissan to residential clients in the Carolinas.

For this project, Bots used a special stain and a high-build epoxy. The stain and epoxy are environmentally friendly for both humans doing the application and paws inheriting the end result. The Barker Lounge’s floors now are attractive, durable and easy to maintain.
Not much landscaping was needed because existing trees complemented the outdoor play area. An artificial turf, however, was put down to facilitate maintenance. The Barker Lounge has indoor and outdoor security cameras, an air filtration system, and climate control.

Other subcontractors were Hartsell Brothers Fence and Automated Security Gate Systems of Charlotte, Coatings 2000 of Charlotte, Hinson Electrical Contractors of Kannapolis; and Carolinas Contractors Services of Spartanburg, South Carolina. “It was a good team effort,” Yoxtheimer says. J.D. Goodrum’s role, Yoxtheimer says, was “To understand what the customer wanted and introduce that to the construction schedule and process it all.”

Customers are happy, according to online comments from several sources. Many have specified they like the facility’s cleanliness and organization. In fact, plenty of puppy parents have posted pictures of Fido climbing on the slide, running up a ramp, sitting in the wading pool or chasing a ball with his new daycare friends.

The Barker Lounge’s founder, Jason Puleio, is happy too. “I can honestly say that we were thoroughly pleased with every element of JD Goodrum’s involvement. They finished the project on time. Our facility turned out beautifully…exactly as called for when drawn up on paper! The attention to detail was second to none. Every part of the process and every ounce of work was done with the type of professionalism that is usually only found in very large projects…We were nothing less than 100 percent satisfied and if we had to do it all again, we wouldn’t change a thing.”