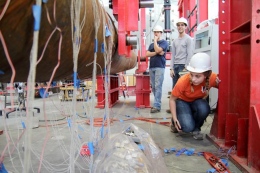 North Carolina’s unemployment rate fell in April to 9.4 percent – its lowest level in more than three years – but the state continued to see a deceleration in the rate of new jobs being created this year, reports the Charlotte Observer.  After gaining 28,000 jobs over the first two months of the year, the state has lost 1,300 jobs in each of the past two months.

“When you dig into those underlying trends it’s not necessarily as positive,” said John Quinterno, a principal with South by North Strategies, a Chapel Hill research firm that focuses on economic and social policy. “Particularly in the past couple of months much of the improvement is due to the labor force contraction and then decreasing labor force participation as opposed to higher levels of employment.”

The unemployment rate declined from 9.7 percent in March, according to data released by the state Division of Employment Security, and has dropped one percentage point since December. The numbers are adjusted for seasonal fluctuations.

The current rate is slightly below where it was in February 2009, when it stood at 9.5 percent, but it remains well above the national average of 8.1 percent.

Although job growth has slowed in recent months, more industries in the state are showing improvement compared to a year ago, said Wells Fargo economist Mark Vitner.

“The recovery hasn’t gotten a whole lot stronger than it was a year ago, but it’s occurring across a broader base and that should make the economic recovery more durable,” he said. The state has added 30,300 nonfarm jobs over the past 12 months, with all but 4,800 of those created in the private sector.

The sector that added the most jobs during that period was professional and business services, which gained 9,300. Vitner said anecdotal evidence suggests those gains are being driven by technology companies focused on energy and power production and the mobile Internet – two areas that are growing faster nationwide than the overall economy.

Charlotte has a strong base of energy-related companies, while the Triangle is home to a growing number of companies targeting the mobile Internet.

Vitner said the state is likely entering a period, similar to last summer, when economic indicators will be highly volatile. He attributed that volatility to the economic uncertainty now plaguing Europe, which is likely to hurt some companies’ earnings and cause others to take a wait-and-see approach to investment and hiring.

“One of the biggest challenges for me and for businesses is to try and ignore those one-off negative numbers,” he said. “It’s encouraging that we’re seeing some improvement and, to the extent that the state’s growing at a faster rate than people had thought a few months ago, we should be better able to withstand challenges from Europe.” Read More.