Appreciating the logical, black and white nature of construction law and having a passionate desire to see justice done may seem like two opposing views, but for Sarah Carson, they’re a natural fit.

Holding the title of counsel with Smith, Currie & Hancock LLP—a firm that only does construction law work—Carson has handled cases worth millions of dollars (including one where she represented a contractor in arbitration with the owner concerning a $15 million roofing installation contract and one where she negotiated contracts and litigated actions on behalf of owner regarding a mixed-use apartment community valued at $81 million), but the size of the case doesn’t matter to her. The facts of the case do.

“In terms of righting wrongs, I’ll help somebody with a $25,000 claim. Nobody should be taken advantage of regarding the amount of the claim. That’s the reason why I became a lawyer: to right those wrongs regardless of the amount at issue. If you negotiated for a certain result and suddenly a subcontractor disappears, it’s not fair for anyone regardless of the size of the company to have to absorb those costs,” says Carson.

That drive to right wrongs has been with Carson throughout her career. While working at her first firm after law school, she says she encountered a lot of situations where people tried to take advantage of government contracting rules.

“Too often, private contractors try to take advantage of the federal government or of state governments by lying about the amount of women-owned small businesses so they can get a contract. I can’t tell you the number of ‘women-owned small businesses,’ where the woman is just on paper. It’s someone’s wife who has absolutely nothing to do with it. And those businesses are taking away opportunities from another company or contractor that truly is qualified. And that was frustrating and brought out in me the need to fight and right the wrongs that so often happen in government contracts and in private contracts.”

Carson says that construction law offers all parties involved the benefit of being clear cut with defined goals.

“There is a structure in place in from the very beginning of the contract that you want to build upon,” she says. “You have a map in terms of the contract and there are expectations and rules from which everybody is supposed to abide by, and when one veers off that path, it’s an opportunity to put them back on that right path.”

As a women working in construction law, Carson has had plenty of opportunities to demonstrate to fellow lawyers, contractors, and other members of the industry, that women in general should be taken seriously, and that Carson in particular should be regarded as an expert who gets results. She mentions her first trial where opposing counsel took a look at her and told his client that a woman meant a slam-dunk victory. He, of course, was wrong.

“When you’re already being underestimated, you’re going to work twice as hard to prove them wrong. And from that point forward, they develop a new respect and a new understanding of female attorneys and of my abilities.”

Carson says she’s even encountered situations where people on the opposite sides of cases she has tried have approached her after seeing her skills in the courtroom and asked her to work for them. After taking them on as clients, she successfully gets results their male lawyers couldn’t.

The respect she has earned from her work in court has been far reaching, as lawyers from across the nation have called upon her for consultation or advice after hearing one of her closings or reading reports of one of her arguments.

Carson also shares her expertise with law students, and has taught construction law at both the graduate and undergraduate level. She also publishes articles and opinions, and has articles published in engineering and law journals.

As a member of the North Carolina Bar Association’s Legislation Committee, she has a deep familiarity with changes to the law and what those changes mean for her clients. Next year, for example, general contractors will be required to have a set-number of continuing education hours, and Carson is able to explain exactly what that means and how to best accomplish the requirement.

Having worked with a vast range of clients, from those involved in casino projects, mixed-use developments, and even overseas (including Afghanistan) and local military bases, Carson has a level of first-hand knowledge that clients appreciate.

“I have the experience and assertiveness to understand what these clients are experiencing in the construction industry. I’ve had boots on the ground to see the hurdles.

“I’ve got experience from drafting the contract to litigation and mediation and every step of the way, I can help a client succeed in terms of delivering a project on time, on budget and for maximum profitability with the minimum of claim,” she says. 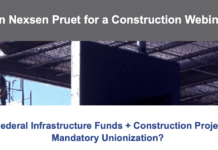