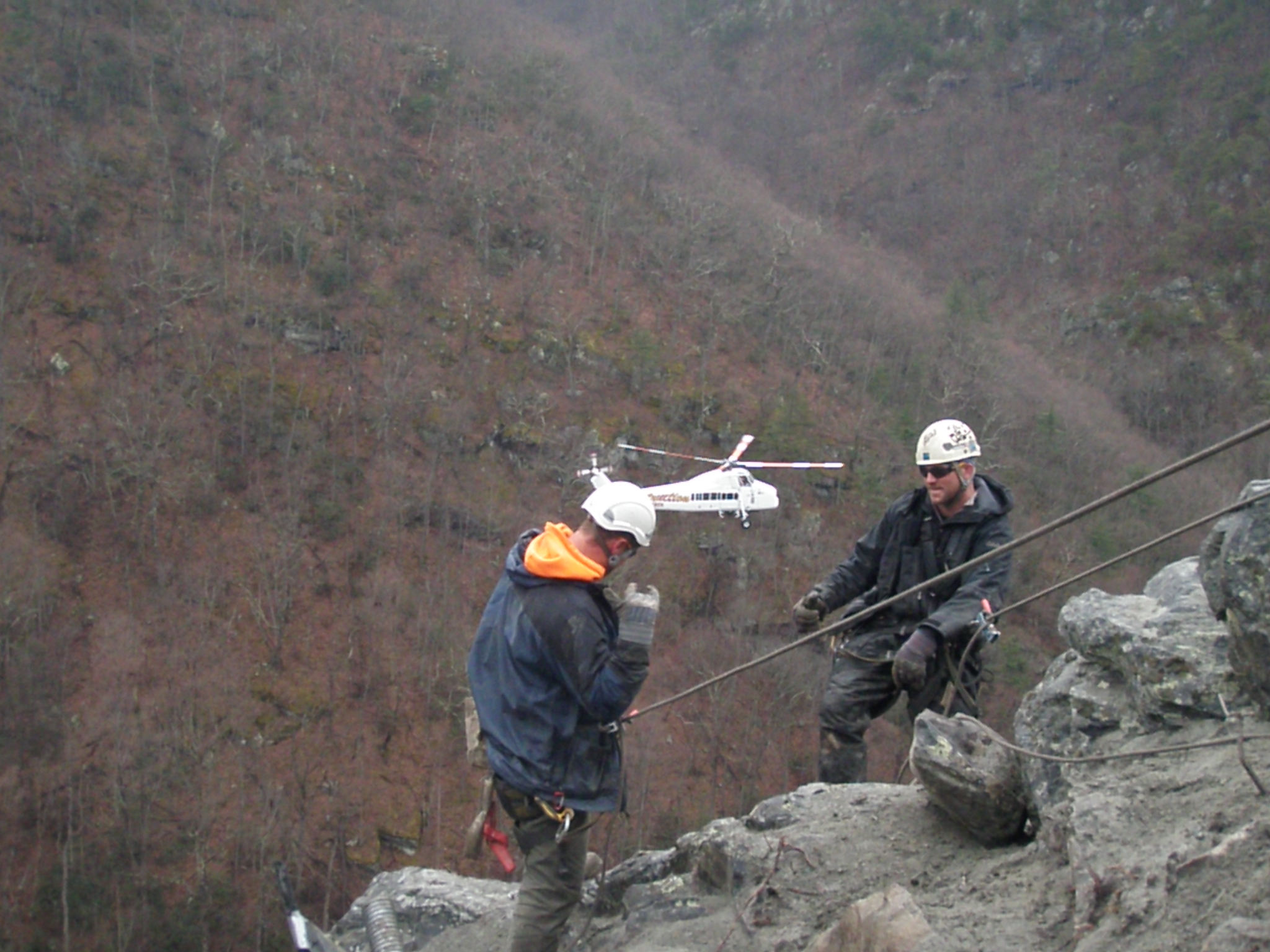 The slope stabilization and rock slide removal on Interstate-40 in Haywood County, NC earned a 2011 “Best Highway Project Pinnacle Award” from the Carolinas AGC.  Phillips & Jordan, Robbinsville, NC, performed as general contractor on the project. The contractor known for its experience with land clearing, earth moving, underground utilities, erosion control, storm drainage, and debris management projects. “P&J has been a part of some of the largest disasters in history. The World Trade Center, Hurricanes Andrew and Katrina, but none of those prior events brought the complexity and danger as this project, “said Dudley Orr with Phillips & Jordan.

Most of those areas of expertise were  called on when the firm was hired to tackle a major rock slide onto four lanes of I-40 near the North Carolina-Tennessee border. First task: clear the road of 75,000 cubic yards of soil, trees and boulders. That took 45 days.  Second task: stabilize the mountain slope to prevent another slide —- while vehicles, many of them commercial trucks, resumed passage below.

Phillips & Jordan’s primary subcontractor was Janod, Inc., which has handled slope stabilization assignments all over the world. Not only was the work daunting, so was the contract. The state Department of Transportation wanted intermediate completion in 60 days, or the contractor would be penalized $20,000 a day – and action was to begin during the week between Christmas and New Year’s Eve. Regardless of the icy, windy conditions at that particular time (the governor had declared a weather emergency), work was urgent because the road closure was affecting local residents, who faced hours-long delays going to work, and school, etc., and affecting commerce, as semis’ loads were unable to use a vital interstate corridor to access the region and beyond.

Janod brought on Golder Associates, Inc. of Greensboro, NC and Manchester, NH for quality assurance, field engineering to adapt the DOT design to encountered conditions, coordinating details among all project participants and making a master spreadsheet for drilling, anchor installation, and testing available to the state Department of Transportation. ”Golder brought clarity to a daunting process of record keeping and analysis,” said Orr.

How do you fix a mountainside?  Well, you don’t just go to it. You have to be on it. Personnel, equipment, and materials all needed to be on the slope 900 feet above the highway to perform the remediation. To facilitate moving equipment and steel, Janod used a heavy-lift helicopter for 120 hours to get rock bolts and related items up to where they were needed. “Without the foresight and willingness to utilize the helicopter, meeting the project timeline goals would not have been achievable,” according to Phillips & Jordan. Once completed, the Janod team had installed over 16,000 LF of tensioned anchors as well as another 33,953 LF of passive anchors. All of the approximately 50,000 combined LF of anchors was installed using the heavy lift helicopter that was crucial to the completion of the job. “This work was unprecedented for production under difficult terrain and weather conditions and a tribute to the team that got it done,” said Pete Ingraham, Golder’s lead geotechnical engineer on the project.

There were other complications: in some parts of the mountainside, actual rock mass strength was not as consistent as tests had indicated it would be; in other parts, subsurface water was found, forcing a design change from tensioned bars to a passive anchor system. The original scope of work changed so much that eventually, 18 supplemental agreements were signed.

Worksite hazards abounded, and as Phillips & Jordan told the Pinnacle judges, “the margin for error with all of the work was very slim.” Special safety plans were needed for fall prevention, slope access, rigging, blasting, working under the heavy lift helicopter, traffic management, tree removal, and respiratory protection, just to name a few. Nevertheless, it was a safe site; the most severe injury was to a subcontractor’s finger. In just sixty- six contract days, the team of workers succeeded in their efforts to stabilize the slope so that the vital transportation corridor could be reopened.

With numerous changes and revisions to their work during this time, the contract sum overran. With pro-rata there were no liquidated damages assessed to Phillips and Jordan. Read More.