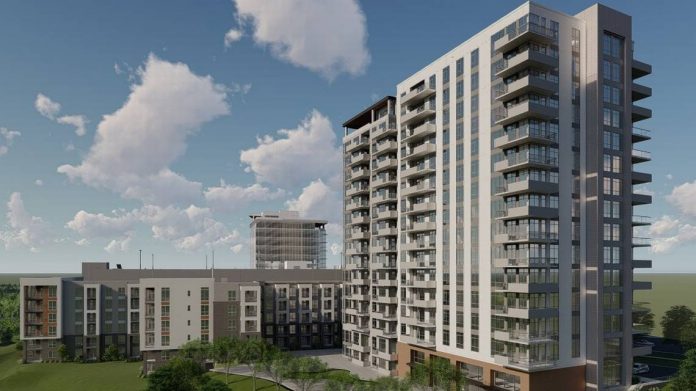 Developer Northwood Ravin says that it plans to build a 212-unit apartment in Ballantyne Corporate Park, as part of a major redevelopment to turn the business park into a mixed-use community.

The project includes a 16-story tower and a five-story building, with a  mix of one-, two-and three-bedroom apartments and townhouses, ranging from 650 to 3,800 sq. ft.

The project, near the intersection of Ballantyne Corporate Place and Ballantyne Commons Parkway, is next to an 11-story office and luxury apartment building under construction, The Charlotte Observer reports. The company did not disclose the project’s cost.

Northwood wants to evolve the 535-are business park into what it describes as an “urban, walkable community.”

It’s part of a push from the 535-acre business park’s owner to make Ballantyne an urban, walkable community.

As part of that process, Northwood Office, a subsidiary of the park’s owner Northwood Investors, plans to build a 25-acre town center with shops, restaurants, parks, an amphitheater and 2,000 apartments.

The developers expect that some 175 units, or 8 percent of the total planned, will be set aside for households earning 80 percent of area median income, which is about $63,000 for a family of four.

Northwood Investors bought the corporate park from the Bissell Cos. in 2017 for $1.2 billion in the largest transaction in Charlotte real estate history. The park has more than 4 million sq. ft. of office space. It includes companies such as Brighthouse Financial, Wells Fargo and TIAA.