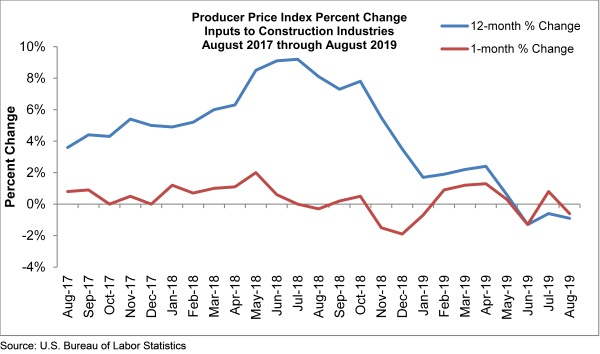 The construction industry added 7,000 net new jobs in September, according to an Associated Builders and Contractors (ABC) analysis of data released recently by the U.S. Bureau of Labor Statistics. On a year-over-year basis, industry employment has expanded by 156,000 jobs, an increase of 2.1%.

Nonresidential construction employment increased by 3,800 jobs on net in September and is up by 96,300 net jobs during the last 12 months. Job gains were split between nonresidential specialty trade and heavy and civil engineering, which added 3,000 and 2,400 net new positions, respectively. Nonresidential building lost 1,600 jobs last month and is down 8,400 jobs for the year.

“In many ways, this is another perfect employment data release,” said ABC chief economist Anirban Basu. “While some economists will point out that the 136,000 net new jobs fell short of expectations, data characterizing labor market performance were revised upward for a net gain of 45,000 jobs in July and August.

“In addition, September’s 3.5% unemployment rate is a 50-year low. A bit less attention will be paid to the fact that year-over-year wage growth came in at 2.9%, the lowest increase since July 2018. In total, today’s data release suggests that the current U.S. economic expansion will persist for the foreseeable future, as ongoing job growth propels consumer spending and as surprisingly modest inflationary pressures keep interest rate increases at bay,” Basu said in a statement. “Nonresidential construction employment continued to expand in September, a reflection of a segment that remains flush with work,” said Basu. “The ongoing declines in various measures of unemployment are consistent with the notion that the average contractor, including subcontractors, will continue to face enormous difficulty recruiting new employees. Many contractors continue to pay for substantial overtime, translating into flat profit margins or worse in the context of still plentiful bidding opportunities.

“There is, however, some cause for concern,” said Basu. “Momentum in commercial construction appears to be fading, perhaps due to a sense that certain market segments have become overbuilt and/or because the cost of construction services has risen sufficiently to render certain projects uneconomical. Recent readings of leading indicators such as the Architecture Billings Index suggest that the pace of design work has begun to soften in recent months. This is consistent with today’s data release, which indicated that the nonresidential building segment lost 1,600 jobs in September and 8,400 over the past year.”