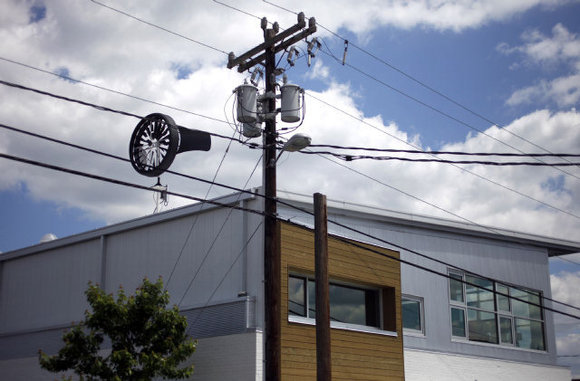 Left: One of two 1.5-megawatt wind turbines on the roof of BuildSense and Studio B Architecture in Durham

The net-zero building concept is winning coverts in the Triangle, reports the News & Observer.  The space-age energy concept refers to buildings that are so efficient they can generate more electricity than they use. Long considered beyond the reach of ordinary mortals, Triangle area green enthusiasts are taking aim at the ultimate bragging right.

Dick Paar is one of those people who’s dead-set on slashing his power bills and scorns energy waste as a cardinal sin. But the retired software entrepreneur sees no reason to compromise comfort to achieve his environmental goal.  Paar opted for a trendy-looking 2,950-square-foot residence this year in Chatham County that looks like a resort lodge and is designed to function as a “net-zero energy” home.

Breaking away from the custom-design niche, the local net-zero universe has expanded to include a modest net-zero office in Garner and plans for a 14-home net-zero community in Chapel Hill, to be called NewPhire.  And coming soon: National builder KB Homes plans to make Raleigh its next showcase for an affordable net-zero model. The California-based homebuilder hopes to produce the model, dubbed Zero House 2.0, for the mass market at a starting price as low as $250,000.

Other areas of the country already have net-zero duplexes, libraries, offices and retirement resort communities.

“No longer is it the early-adopter hippies from Boulder, Berkeley and Asheville taking this on,” said David Johnston, a Colorado sustainability consultant and author. “It’s become a real middle-class reawakening.”

Johnston, author of “Toward a Zero Energy Home: A Complete Guide to Energy Self-Sufficiency at Home,” estimates that 400 to 500 net-zero homes have been built in this country, most of them in the past five years. The exact number is unknown because there is no national registry for the buildings.

Some may be net-zero in name only.  There’s a lot about the emerging concept of net-zero buildings that’s squishy and elusive. For one thing, there are at least four definitions of net-zero, according to the Net-Zero Energy Home Coalition, a Colorado organization that is developing a uniform standard and certification program.

The most widely used definition is a simple measure of energy consumed versus energy generated over the course of one year. But some opt for stricter measures, such as taking into account total carbon emissions based on how a home’s location influences the owners’ driving mileage for shopping and commuting.

What’s more, determining a net-zero rating for a home is not as simple as assigning an Energy Star rating to an appliance. Household energy performance is highly dependent on occupant behavior, weather, the number of occupants and other factors.

That means that at least some net-zero enthusiasts may discover at the end of a year that their zero-energy fantasy has eluded them, even though they indisputably occupy high-efficiency buildings.

Case-in-point: Few buildings come as fully loaded with green features as the Durham office of BuildSense and Studio B Architecture. The 12,000-square-foot office in Durham has a 32-kilowatt solar array, a pair of 1.5-megawatt wind turbines, compressed natural gas fuel pumps for company cars, and a 3,000-gallon rain cistern on the property.  “We’re selling back to the grid right now,” said Erik Van Mehlman, an architect and partner in both companies. “Our electrical meters are running in reverse.”

But in the final analysis even this green technology extravaganza is likely to remain a “near zero energy” building, acknowledged Mehlman.  Mehlman noted that mild weather is yielding promising results, but intense cooling demands in the summer are likely to tip the company’s energy balance back in favor of the power grid.  “The energy loads of buildings, due to heat load of the inhabitants and computers and other equipment, are a tremendous strain,” he said.

For that very reason, Chandler Design-Build of Mebane has provisionally designated the solar-powered, three-bedroom Paar home as “near-zero” until it can be documented with a year’s worth of utility bills.  Paar paid just $9.77 for electricity in April – mostly for his flat monthly connection charge – thanks to a combination of ultra-efficient windows, extra insulation and rooftop solar panels. He expects to pay Progress Energy less than $300 for a year’s worth of electricity, less than some people pay in a single month, coming out ahead in electricity generation.

Paar estimates he spent $42,000 extra for the building “envelope” and related monitoring technology. That price tag includes his 8-kilowatt solar array whose cost is greatly discounted by federal, state and utility incentives.  “The payback for this is not just monetary,” Paar said. “It’s giving my grandchildren air to breathe down the road. That’s the payback for me.”

Net-zero homes cost more than a conventional home but it’s hard to pin down the amount of the premium because designs are not standardized. Estimates commonly vary between $10,000 and $30,000 extra for insulation, materials, technology and related design, depending on local costs and available incentives.

At Effect Energy in Garner, company president David Parker removed a third of the fluorescent bulbs, turned off the water heater and added an Energy Star-rated printer, fridge and TV. He also put in $30,000 in solar panels. Parker is projecting a net-zero year for his retrofitted office, based on the reduced energy demand and solar power generation. His 1,250-square-foot office in the 70 East Business Park is not equipped with super-efficient windows, building materials or insulation.  “This was a typical office space,” he said. “This is stuff that any office owner or any office renter can do.”  Read More.