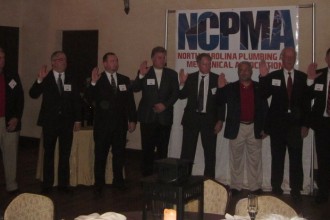 The North Carolina Plumbing and Mechanical Association announced its new officers and Board of Director members for 2014. These newly elected individuals were selected at NCPMA’s Annual Membership Convention last week in Durham. The new leadership team will take office on January 1, 2014.

Herb Hovey, President of HH Hovey Heating and Cooling in Winston-Salem, will serve as NCPMA President for 2014. Other officers elected to serve are Jennifer Warren of Warren Hay Mechanical in Hillsborough as Vice President and John Hicks of Griffin Heating and Air in Statesville as Treasurer.

In addition to electing new officers, NCPMA also welcomed several additions to the Board of Directors. These include:

NCPMA is a leading resource provider for education, expertise and business enhancement services for the cooling, heating, and plumbing contractors in North Carolina and serves as the voice of these industries on a local, state and national level. Read More.