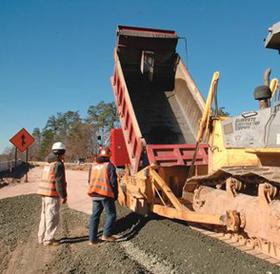 A state Department of Transportation agency failed to seek competitive bids when it gave out contracts worth hundreds of thousands of dollars to a Raleigh consultant, and an investigation found other irregularities in the spending of federal grants worth millions of dollars , reports the News & Observer.

Shelton A. Russell of Cary resigned as head of DOT’s Business Opportunity and Workforce Development office in December, as an internal investigation was winding down. The office spends mostly federal grants – more than $6 million since 2004 – to nurture businesses owned by minorities and women and to help them qualify for DOT contracts, mostly as subcontractors on road projects.

Russell, 48, said the accusations were unwarranted and that he stepped down when he saw the investigation was going against him. He defended his work at DOT. “I think I did a great job,” said Russell, who had been in charge of the BOWD office, with about 18 employees, since 2004. “This thing caught me by surprise in terms of suggesting that I was operating inappropriately.”

Russell’s boss, Anthony W. Roper, was allowed in January to transfer from a top Raleigh job, as one of four DOT deputy secretaries, to a lower-paying, mid-level DOT job based in Edenton. Roper now serves as operations engineer in DOT Division One. A Jan. 13 investigative report by forensic accountants faulted Roper for “permissiveness” when he approved 19 noncompetitive contracts that should have been reviewed by DOT purchasing managers.

“Top management was setting bad examples and getting away with it,” said the report, released last week by Eric Boyette, then DOT inspector general. “We recommend a review of how ethical standards are communicated and enforced.”

Roper’s departure might not be related to the investigation. Two deputy secretaries have been ousted by the new DOT secretary, Tony Tata, who took charge after Gov. Pat McCrory’s inauguration in January. A spokeswoman said Roper had expressed a desire to return home to his family in Hyde County. Roper did not respond to a request for comment.

Boyette released a nine-page report of findings and recommendations he had commissioned last fall from a pair of accounting firms. He promised last Tuesday to provide follow-up details – but by Monday he himself was out of a job. A secretary said Boyette was no longer DOT’s inspector general, its chief internal auditor, and had been reassigned to another post.

The investigation characterized Russell as ignoring DOT rules for competitive bidding, and other checks and balances, when he made unilateral spending decisions that Roper and others should have reviewed.

Russell had “personal relationships” with some vendors who won contracts, Boyette said. He said Russell handed out $97,180 for awards banquets, scholarships and other uses to legitimate organizations, but for purposes outside the agency mission.

Russell acknowledged minor relationships that had developed after he met two vendors through their DOT work. He scoffed at “the idea that I steered contracts toward folks.”

DOT released files on 18 contracts worth $1.1 million awarded between 2003 and 2012 to Raleigh-based Bridges Consulting Group LLC. Most of the documents were signed by Russell’s predecessors and, he said, approved by his superiors.

“That was not my selected vendor, but I was encouraged to do that contract,” Russell said

No DOT employee was accused of spending public funds for personal use, or spending it for services that were not performed. Boyette said there was no evidence of wrongdoing, and no need to seek involvement by the State Bureau of Investigation.

“There is definitely a benefit from this program,” Boyette said. “It just needs proper management, and good ethical leadership at the top.” Read More.