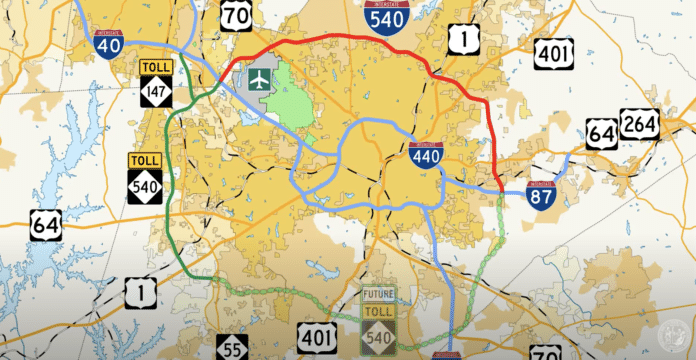 He said the North Carolina Turnpike Authority (NCTA) was created in 2002 to finance transportation improvements through tolls. The NCTA received a yield of 0.9% on the Bond Anticipation Notes (BAN), translating into a $12.5 million savings.

“The issuance of these notes will allow the Turnpike Authority to draw on the funds as they need them and only pay interest when they actually use the money,” Folwell was quoted as saying by thecentersquare.com. “It works like a line of credit. It’s much more efficient and saves taxpayers from paying interest on money that is just sitting in an account. These savings are especially important as turnpike revenues have dropped since March due to the COVID-19 pandemic.”

The recent sales from the notes will be used to cover a portion of the costs of land acquisition, design, construction and equipping of the next phase of the Triangle Expressway System known as Complete 540 – Phase 1. The project extends the Triangle Expressway for about 17.8 miles from the North Carolina Highway 55 bypass in Apex to Interstate 40.

Construction of Complete 540 – Phase 1 began in late 2019 and is expected to be substantially completed by July 1, 2023, Folwell’s office said.

The Council of State approved issuing $700 million in Build NC bonds Oct. 6 to support road construction and repairs. The bond is expected to be sold Oct. 29. Fitch Ratings gave the bond a AA rating.

The Build NC bonds are a part of a $3 billion transportation package approved by the North Carolina Legislature in 2018. The State and Local Government Finance Division issued $300 million of Build NC bonds in June 2019.

“Since 2017, we’ve issued more than $1.5 billion in new money for highway construction and another $600 million in GARVEE bonds,” Folwell said. “The hardworking men and women at NCDOT and the hundreds of contractors across the state need sustainable and consistent funding to address current and future road-building needs of North Carolinians.”