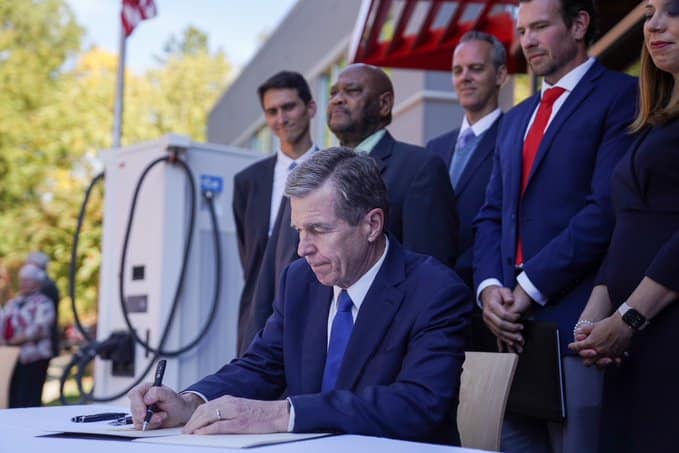 North Carolina state will require van, bus and commercial truck manufacturers to sell more zero-emission vehicles in the state over the next decade, Governor Roy Cooper said on Tuesday.

Signing an executive order at the North American headquarters of electrical equipment company ABB, Cooper said the goal is to cut pollution from medium- and heavy-duty vehicles and promote charging and fueling infrastructure.

“North Carolina is already a national hub for truck and bus manufacturing and supply chain development, and we should not miss the opportunity to lead the market-driven transition already underway to cleaner and increasingly cheaper zero-emission technologies that benefit our economy and our communities,” Cooper said in a news release.

The order directs the Department of Environmental Quality to create the Advanced Clean Trucks Program to the Environmental Management Commission by May 2023.

Cooper’s office said the program would apply to medium- and heavy-duty vehicles, whose gross vehicle weight rating is at least 8,500 pounds (3,856 kilograms).

The required sales shares of zero-emission vehicles by manufacturers under the program would increase over time from 10-13% in 2026 to 40-75% in 2035, depending on vehicle sizes, the governor’s office said.

The order comes several months after the governor directed the transportation department to create a “Clean Transportation Plan” to reduce carbon emissions.

Any final Environmental Management Commission rule would be subject to additional scrutiny by a state rules panel. It’s also possible that the General Assembly could formally vote to block any rule.

Cooper joined a multistate memorandum of understanding in 2020 that would seek to increase sales shares of zero-emission medium- and heavy-duty vehicles to 30% by 2030 and 100% by 2050.