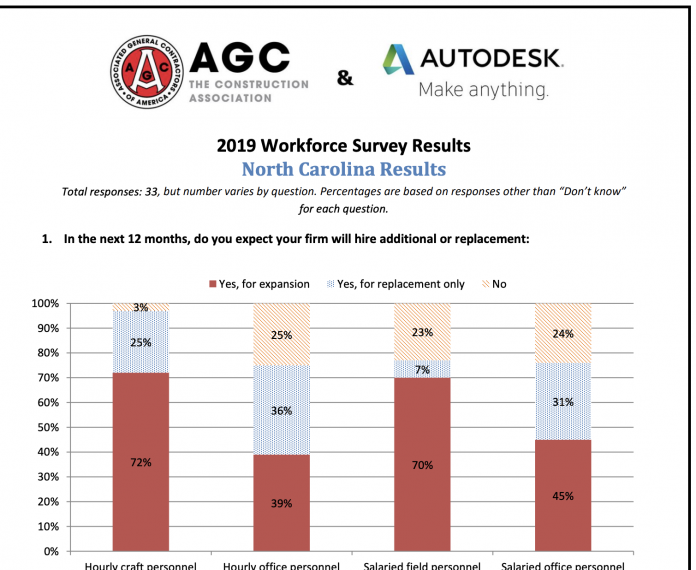 More than nine in 10 North Carolina contractors report they are having “a hard time filling some or all positions” for construction tradespeople, according to a survey from the Associated General Contractors of America (AGCA) and Autodesk.

The story for salaried positions is a little less severe — with 73 per cent saying hey are having trouble filling openings, but that discrepancy is explained by the fact that many contractors simply don’t need more salaried workers right now.

The sample size isn’t huge — only 33 — but the data suggests only six percent of contractors are having “no difficulty in filling any positions.”

The AGCA data suggests that the labor shortage in North Carolina is sightly more severe than the nation as a whole at 80 percent.

AGCA officials said the industry was taking a range of steps to address the situation but called on federal officials to takes steps to assist those industry efforts.

“Workforce shortages remain one of the single most significant threats to the construction industry,” said Stephen E. Sandherr, AGCA’s chief executive officer. “However, construction labor shortages are a challenge that can be fixed, and this association will continue to do everything in its power to make sure that happens.”

Nationally, of the nearly 2,200 survey respondents, 80 percent said they are having difficulty filling hourly craft positions, Sandherr said. All four regions of the country are experiencing similarly severe craft worker shortages, with 83 percent of contractors in the West and South reporting a hard time filling hourly craft positions, almost identical to the 81 percent rate in the Midwest and 75 percent rate in the Northeast.

In North Carolina, the data indicates two-thirds (66 percent) of contractors say they are having trouble filling positions for project managers and supervisors, while 45 per cent say there are difficulties in finding quality control personnel and 39 per cent report challenges in recruiting Environmental compliance professionals.

Among trades, there is a 100 per cent shortage of pipelayers, iron workers, drywall installers and bricklayers, while several other trades and crafts also in extremely short supply. The only categories reporting less than 50 per cent hiring difficulty are millwrights and traffic control personnel.

Most contractors report it will either continue to be hard to find workers, or even more difficult than  before.  Contractors report the pipeline for adequately trained skilled workers is poor, with 55 percent saying it is inadequate.  Disturbingly, 34 per=cent report there are problems with workers being able to pass drug tests, and 30 percent say they are having difficulties with background checks.

In response to the labor shortage, 88 percent of North Carolina’s surveyed contractors have raised pay rates for craft workers in the past year. They are also engaging with career building programs (64 percent), using staffing firms (45 percent) and engaging with government workforce development or \unemployment agencies (33 percent) among other measures.

“Construction workforce shortages are prompting many firms to innovate their way to greater productivity,” said Allison Scott, head of construction integrated marketing at Autodesk. “As the cost of labor continues to increase and firms look to become even more efficient, technology can enable better collaboration and ultimately lead to more predictable outcomes. There is also opportunity in untapped pools of talent such as tradeswomen, veterans, and young people looking for an alternative to the traditional four-year university.”

Even as the industry works to address labor shortages, 44 percent of firms report they are increasing construction prices and 29 percent are putting longer completion times into their bids for new work because of the lack of workers, putting future development and infrastructure projects at risk. Association officials called on the federal government to boost funding for career and technical education. They also called on federal leaders to allow more immigrants to enter the country to work in construction, let construction students at community and career colleges qualify for federal Pell Grants, and make it easier for firms to establish apprenticeship and other training programs.

Seventy-three percent of firms report it will continue to be hard, or get even harder, to find hourly craft workers over the next 12 months. One reason for their worries is that contractors are skeptical of the quality of the pipeline for recruiting and preparing new craft personnel. Nationally, 45 percent say the local pipeline for preparing well-trained and skilled workers is poor. And 26 percent say the pipeline for finding workers who can pass a drug test is poor.