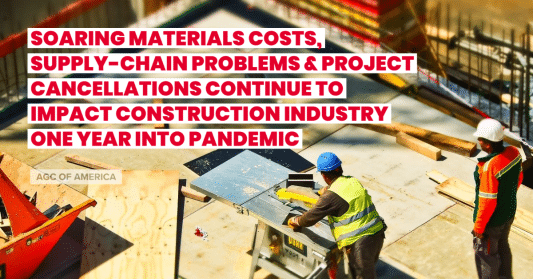 Construction employment in January remained below pre-pandemic levels in all but eight states, according to an analysis by the Associated General Contractors (AGC) of America of government employment data released on March 15, while more firms have reduced headcount than have added to it in the past year, the association’s recent survey shows. Association officials said the jobs figures and survey results underscore the need for federal measures to stem future sector job losses.

“Despite improvement in many sectors of the economy, nonresidential contractors are coping with widespread project cancellations and postponements, soaring materials costs, and lengthening delivery times,” said Ken Simonson, the association’s chief economist. “That combination makes further job cuts likely in many states.”

The national survey, which included responses from nearly 1,500 firms, found 34 percent had reduced their employee count in the past year, compared to just 20 percent that had added employees. More than three-fourths of the firms had experienced project cancellations or deferrals, while only 21 percent reported winning new projects or add-ons to existing projects in the past two months.

From December to January,19 states and D.C. lost construction jobs, 27 states added jobs, and there was no change in Alaska, North and South Dakota, and Wyoming. California had the largest loss of construction jobs for the month (-4,000 jobs or -0.5 percent), followed by South Carolina (-3,200 jobs, -3.0 percent) and Illinois (-3,200 jobs, -1.4 percent). South Carolina had the largest percentage decline, followed by Wisconsin (-2.4 percent, -3,000 jobs).

“The pandemic is driving away projects, contributing to spiking materials prices and helping make delivery schedules unreliable,” said Stephen E. Sandherr, the association’s chief executive officer. “Contractors will not be able to build back better if they have to keep paying higher prices for materials that rarely arrive on time.”