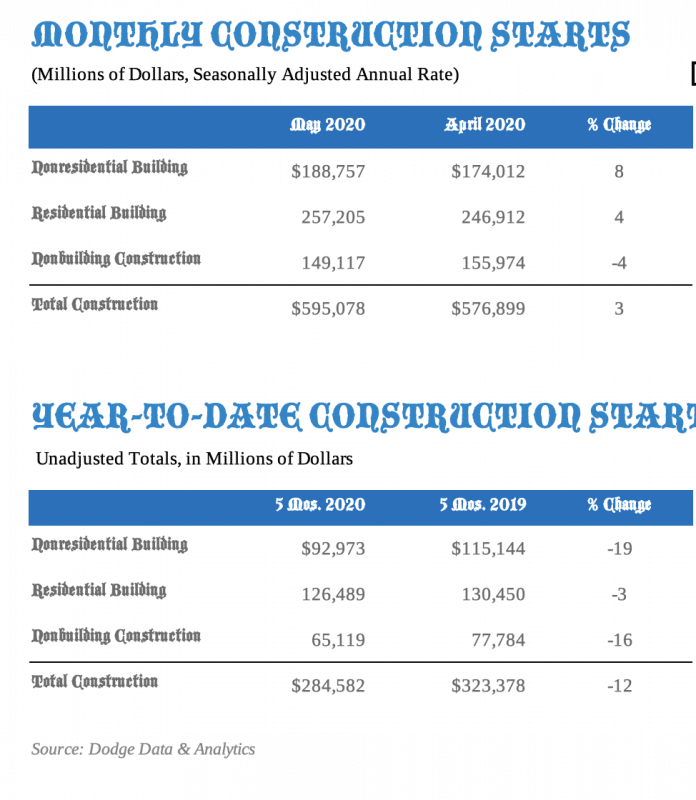 Total construction starts rose 3% from April to May to a seasonally adjusted annual rate of $595.1 billion, following a 25% decline the previous month, Dodge Data & Analytics reports.

“While May’s increase in construction starts is certainly good news, the influence of several large projects undermines the notion that the construction sector has fully entered recovery,” said Richard Branch Chief Economist for Dodge Data & Analytics. “Even as state and local areas re-open and bans on construction activity in Boston, New York City and other areas are lifted, the sector will have to contend with digging itself out from a deep economic recession. While the overall economy most likely hit bottom in May, the recovery will be slow since nearly 20 million jobs have been lost since February. The second half of 2020 will be a slog and gains will be modest over the short term.”

Nonbuilding construction fell 4% over the month in May to a seasonally adjusted annual rate of $149.1 billion. The utility/gas plant category dropped 37%, while the highway and bridge category lost 4%. On the plus side, the miscellaneous nonbuilding category increased 31% over the month and environmental public works were flat.

The largest nonbuilding project to break ground in May was the $1.3 billion widening of Interstate 635 in Dallas TX. Also starting in May were the $789 million Lynnwood Link Extension (Northgate to NE 200th) in Lynnwood WA and the $705 million widening of I-405 in Seattle WA.

The largest nonresidential building project to get underway in May was the $950 million SDI Steel Complex in Sinton TX. Also starting during the month was the $355 million Fig + Pico hotel towers in Los Angeles CA and the $360 million Wolf Point South Tower B building in Chicago IL.

The largest multifamily structure to break ground in May was the $180 545 Vanderbilt Ave mixed-use development in Brooklyn NY. Also starting was the $150 million 354 N Union apartment tower in Chicago IL and the $150 million Ripley II – Solaire 8200 Dixon Luxury Apartments in Silver Spring MD.