The partnership selected to negotiate with the county is comprised of Charlotte firm Conformity Corp., New York-based developer The Peebles Corp., and Stantec, which will be providing planning, urban design, architecture and engineering for the project. Local offices of Perkins+Will and Cole Jenest & Stone are also on the design team.

The duration of the negotiation is estimated to be six months to one year. That period is expected to include a substantial stakeholder-community engagement process, including with the board of commissioners.

BK Partners said it will spend $683.3 million on the project, which will be split into two areas.

Brooklyn Village South will be built south of Stonewall St., across from the Mecklenburg Aquatic Center. It will include more than 500,000 sq. ft. of office space, retail and apartments, and a 150-room hotel. 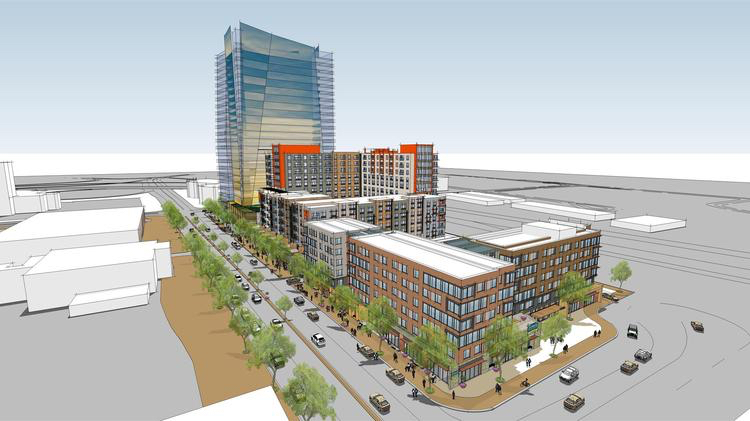 County staff recommended the board select BK Partners, citing its plan’s diverse mix of uses, number of anticipated jobs to be created, proposed retail program and key components to be delivered in the first phase plus the open space, cultural amenities and affordable housing in all three phases.

“We are thrilled to have been selected by the county commissioners to redevelop Brooklyn Village,” said Don Peebles, chairman of The Peebles Corp., in a statement. “We look forward to continued collaboration with public officials and community stakeholders to ensure the final direction of this project be one of cultural inclusivity and equal economic opportunity. We are committed to transformative opportunities for local minority and women owned businesses.”

“Brooklyn Village had poverty,” Commissioner Vilma Leake said. “Brooklyn Village had barbershops and small corner grocery stores. There were no parks there, period. Second Ward High School was the park where people went for activities. They tore it down and it’s no more.”

InterContintental Hotels will develop both hotels for BK Partners. There will be 1,244 residential units on both sites, with 10 percent set aside for affordable housing.

The county said The Peebles Corp. is the nation’s largest minority-owned real estate developer. Peebles has built projects such as Lincoln Place in Miami Beach.

In BK Partners’ updated plan, 1.9 acres of public green space and public park would be included within the two-parcel development of Brooklyn Village North and Brooklyn Village South, connected by a walkway called Myers Passage. The partners also have proposed:

Commissioner Ella Scarborough expressed dissatisfaction with BK Partners’ plan, indicating she favored Crescent Communities’ proposal, but added her discontentment is reflective of a bigger problem of exclusion in the U.S.

“We made a decision for people who lived in this community all this time, but they’re not at the table,” Scarborough said. “We didn’t do enough to be inclusive of what they want. In our minds, we said, ‘This is best for the neighborhood, for the people, for Charlotte.’

The BK Partners proposal calls for 1.9 acres of open space.

“We talk about the participation of minority contractors and minority business in this town,” Mecklenberg County chairman Trevor Fuller said. “The fact of the matter is, there is far too little minority participation in projects in this town. Yet here, we have an opportunity to do something about that.”

“It’s an opportunity to avoid the gentrification that has occurred in our community,” Fuller said. “We haven’t been paying attention to this problem. We have an opportunity (to fix) income segregation in this town.”