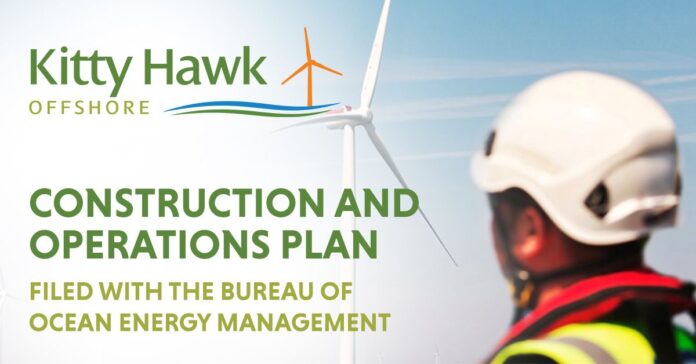 The Kitty Hawk Offshore Wind project is projected to generate nearly $2 billion in total economic impact over the next decade in Northeast North Carolina and Virginia, Avangrid Renewables says in an Economic Impact study. The project developers expect “nearly $1.5 billion in construction activity and sales” in the Virginia and Hampton Roads MSA, including Northeast North Carolina and Southeast Virginia.

Kitty Hawk Offshore Wind says it submitted its Construction and Operations Plan to the Bureau of Ocean Energy Management on On Dec. 11. Construction is expected to start as early as 2024.

Developers propose to capture wind energy with enough power for approximately 700,000 homes from an extensive offshore site more than 27 miles from the Outer Banks. The Wind Energy Area is projected to be able to support 2,500 MW of electricity generation.

The U.S. Bureau of Ocean Energy Management (BOEM) awarded Avangrid Renewables a 122,405-acre lease in 2017 for the offshore wind project.

In its statement, Kitty Hawk Offshore Wind says its spending will result in increased employment and household earnings across Virginia and Hampton Roads.