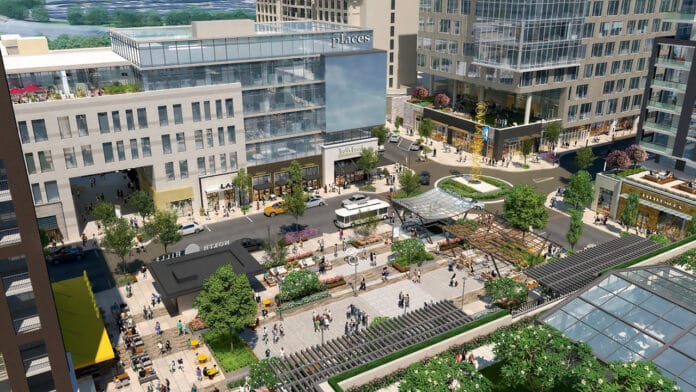 The developer proposes constructing two towers as tall as 40 stories, and two smaller buildings, one that could be up to 30 stories tall, and a final one that could reach 12 floors.

Construction is several years away, the developer says.

The two taller structures could become the highest buildings in Raleigh. The Walter condominium tower in North Hills is currently the city’s tallest, at 35 stories, WRAL-TV reports. The tallest structure downtown is the 32-story PNC Plaza.

“We can either grow out through sprawl or up through urban density,” Gaylord was quoted as saying. “We can’t do urban density in everybody’s neighborhood – nobody wants their neighborhood torn down – so we have to pick the spots where we already have that density to create more. We’re not making any more land.”

The development would combine ground floor retail, with offices and residences on the higher levels. Existing parking lots to be demolished might be replaced with underground garages..

“All of the immediately adjacent neighbors have voiced support it for so far,” Gaylord said. “They generally have bought here, understanding what North Hills is and that’s what they moved here for. So, more of that – more retail, restaurants and amenities – is a good thing for them.

Currently, construction is under-way in North Hills on a 10-story building at the site of a former JC Penny store.