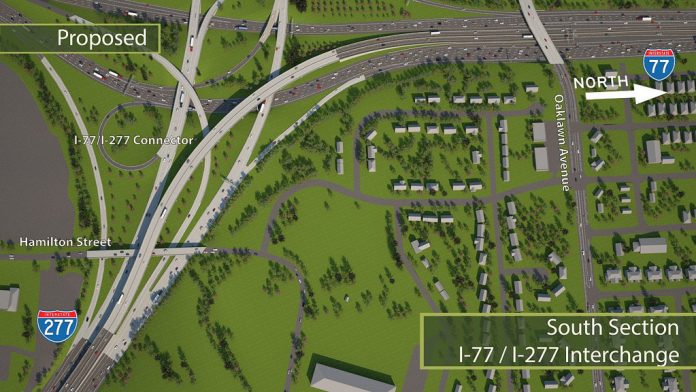 Officials and representatives of Charlotte-area chambers of commerce have discussed the obstacles to making large changes to the controversial Interstate 77 toll-lane project, such as converting some or all of the planned toll lanes into free lanes, The Charlotte Observer reports.

The advisory committee includes representatives from towns and groups along I-77 and the group will eventually recommend what to do with the controversial toll lane project.

The consultant RS&H told the group that the N.C. Department of Transportation would have to re-do much of its environmental impact statement for the highway if it scrapped the express toll lanes. That could take more than a year, the consultants said.

If the state decided to buy out the contractor, I-77 Mobility Partners, it could, in theory, have a situation where the widened highway would be ready for traffic, but unable to be used because the project’s federally required environmental study hadn’t been finished, Carolina Associated General Contractors (CAGC) reports in its news briefs.

The current environmental impact statement is based on I-77 having no new general-purpose lanes, and between one and two new toll lanes in each direction.

Ned Curran, the Charlotte Chamber’s representative on the group, said he’s worried that starting a new environmental review could open the state up to litigation. The Southern Environmental Law Center in Chapel Hill has sued to stop construction of the Garden Parkway in Gaston County, among other highway projects. The group has not spoken about the I-77 toll lanes either for or against. Curran was a member of the NC Board of Transportation when the project was approved in 2016.

However,  some vocal opponents of the toll lanes said that shouldn’t be an issue. Kurt Naas, a Cornelius commissioner who has led anti-toll lane group, said he thought the state could begin work quickly on a new environmental document, which would be nearly ready when the highway is finished at the end of this year.

Mecklenburg commissioner Jim Puckett said the group shouldn’t be deterred by a possible delay of a year or two. “When we talk about the time period of making changes, it’s considerably shorter than 50 years,” Puckett said. “If I have to wait a year or two to fix a road, that’s much better. We have a 50-year project that’s not designed to reduce congestion.”