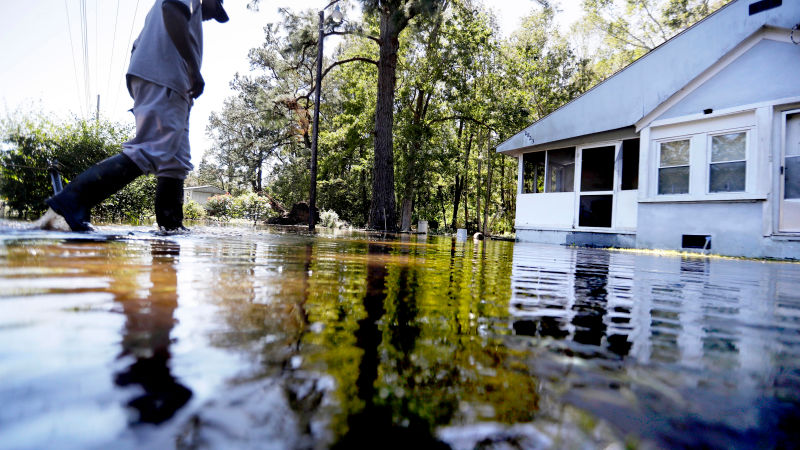 With reports at press time of 20 North Carolina deaths from Hurricane Matthew resulting from serious flooding in several areas, especially Fayetteville, it is too early to assess the damage and rebuilding process, but it will be extensive.

While the hurricane dropped to Category 2 level (sustained winds 96–110 mph), the precipitation has proved to be overwhelming, creating a disaster in many communities.

Fortune magazine reported before the storm that North Carolina could suffer as much as $50 billion in damages if the Hurricane reached Category 4 — with damage levels projected to reach $200 billion in Florida. However, that state got off relatively lightly even as massive rains and heavy winds caused havoc in North Carolina.

Several Interstate and other highways were closed because of flooding, and these will continue and shift as rivers crest, the N.C. Department of Transportation reported.  Washouts could mean lengthy road repairs.

Governor Pat McCrory toured Fayetteville and St. Pauls with first responders after the storm to get a look at the damage. “He had sought an expedited federal designation, and word came late Monday from the president that 31 counties were declared a disaster,” the Raleigh News and Observer reported. “That opens the door for federal assistance to help counties recover from the flooding.

“A lot of people are hurting right now in the aftermath of Hurricane Matthew and the devastation is beyond words,” said McCrory. “This expedited declaration will help provide much-needed and immediate federal assistance to communities impacted by Hurricane Matthew. I want to thank our federal partners for approving this declaration quickly and for their continued assistance.”

McCrory had requested an expedited major disaster declaration that will provide additional and immediate federal assistance to the state. This declaration will help local and state governments augment the costs of responding to the disaster and also help pay to clear and remove storm debris. Preliminary damage assessments are ongoing to help gather the necessary documentation to apply for additional federal assistance for other counties and to reimburse the cost of damaged infrastructure.

In addition, all 100 counties of the state will be eligible for funding to help mitigate future storm damage.

“North Carolina is resilient, our people are strong and we are going to get through this together,” McCrory said. “This storm is still impacting people in a big way. You have got to see it to believe all the devastation that has occurred.”