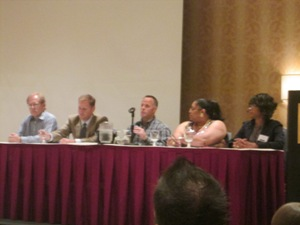 Forsyth County’s Hispanic population grew at a faster rate than that of whites, blacks and Asians in the year from 2011 to 2012, new estimates from the U.S. Census Bureau show.

The Hispanic population grew a little faster from 2011 to 2012 than in the equivalent period the year before, a factor some attributed to the improving economy.  “More jobs are opening around the area,” said Hernando Ramirez, the executive editor of Que Pasa, a Spanish-language newspaper in the Triad. “Construction is going well, and it is sometimes difficult for companies that hire construction workers to find workers to do these jobs. The economy is getting better day by day and the Latino population is growing because of that.”

At the state level, North Carolina participated in a national trend that saw Asians setting the fastest pace of growth among the racial and ethnic groups that the Census Bureau tracks. The number of non-Hispanic Asians in the state increased by 4.8 percent from 2011 to 2012, although their total number — estimated at 231,933 —still was low enough to keep Asians at less than 2.5 percent of the state’s population.

One example of a trend that demographers are predicting already is found in Mecklenburg County. That was one of six counties in the nation where minorities became a majority in 2012. The Census Bureau said that non-Hispanic whites now make up 49.8 percent of Mecklenburg’s population, down from 50.2 percent in 2011.

“I knew that was coming,” said Bill McCoy, a consultant with the UNC Charlotte Urban Institute. “It is happening because all the way through this recession Mecklenburg continues to grow, and the people who are coming here are very diverse. The city of Charlotte had already passed that threshold.”

The Census Bureau said that 60 percent of the nation’s increase in Asians was because of international migration, but that the main driver of the Hispanic increase was a natural one — more births than deaths. Ramirez said that North Carolina’s Hispanic population may be increasing in part because of stricter immigration laws passed in nearby states.

“South Carolina and Georgia approved very harsh immigration laws in the past couple of years, so part of the immigrant population moves to a friendly state,” Ramirez said. “We are seeing a reduction in immigrants coming from outside the country.”  Read More.