The award is AISC’s top safety honor — and Hercules is the only North Carolina winner among more than 70 structural steel facilities to be recognized by AISC for safety in 2015.

“AISC’s annual Safety Awards program recognizes excellent records of safety performance, and we commend these facilities for their effective accident prevention programs,” said Tom Schlafly, AISC’s director of safety. “Periodic recognition of safety in the workplace has been demonstrated to provide worker incentive and a reminder of the importance of safe practices.”

The AISC Safety Awards program is open to all AISC member fabricators and erectors. 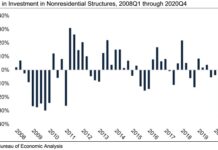 Investment in nonresidential structures up a meager 3% in final quarter of 2020, says ABC