The North Carolina Court of Appeals on Aug. 16, 2022 issued an opinion recognizing arbitrators’ ability to fashion an equitable remedy to award monetary damages to a subcontractor.

R.E.M. Construction, Inc. v. Cleveland Construction, Inc., 2022 NCCOA-557, involved a dispute arising out of subcontracts entered into for the renovation and construction of a high-rise condo and hotel building in downtown Asheville.

Under the “termination for convenience” provision, the subcontractor would be entitled to recover the “actual direct cost” of the work properly performed but would not be entitled to any overhead or profit or compensation for work not performed, or exemplary, special, or consequential damages. After the subcontractor filed suit, the parties submitted the claims to arbitration.

The Court of Appeals rejected the general contractor’s arguments. The subcontracts stated that all disputes under the agreements would be arbitrated under the American Arbitration Association Construction Industry Arbitration Rules and Mediation Procedures and there was no language in the subcontracts expressly precluding the equitable remedy fashioned by the arbitration panel. Under AAA Rule R-48(a), arbitrators have the authority to “grant any remedy or relief that the arbitrator deems just and equitable and within the scope of the agreement of the parties, including, but not limited to, equitable relief….”

The Court of Appeals notably left open the possibility that the case could have turned out differently if the subcontracts had expressly prohibited arbitrators from fashioning an equitable remedy. This opinion may influence how parties structure potential damages in their contracts in the future; and gives the parties opportunity to limit or expand the scope of damages that may be awarded in arbitration. 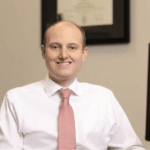 Brad Eben is an associate with Conner Gwyn Schenck PLLC in its Raleigh, NC office. Brad’s practice focusses on litigation and arbitration of construction claims and disputes, drafting and negotiating construction contracts, and regulatory issues affecting the construction industry. Brad is fluent in Spanish.