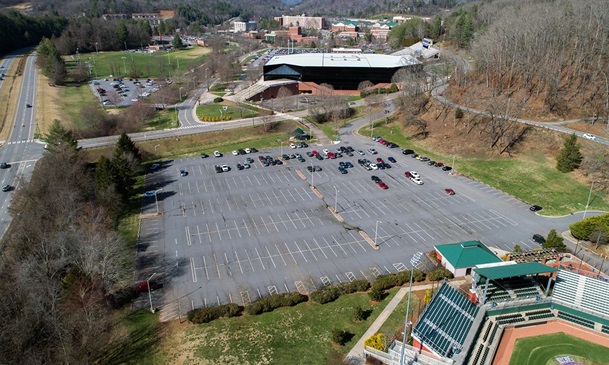 The board also authorized university administrators to proceed with the design of the first of the three structured parking facilities, tentatively planned for the North Baseball Lot adjacent to Hennon Baseball Stadium.

The two other sites approved by the trustees are the former marching band practice field near Reid Gymnasium and a tiered lot behind Hunter Library.

The new structured parking strategy represents a change from the university’s master plan, which had recommended a parking deck be built on or near the site of Cordelia Camp Building, according to Mike Byers, WCU’s vice-chancellor for administration and finance.

“As we began to evaluate Camp and other potential sites for structured parking, it quickly became evident that the Camp option would be more expensive than other locations on campus, where we could take advantage of the topography of the land and we wouldn’t be faced with costs associated with the necessity to relocate administrative offices,” Byers said in a statement.

All three newly-designated sites for parking structures have current surface parking areas that are below street level, Byers added. “This means we can create multiple layers of additional parking without creating too massive of a structure,” he said.

The former marching band practice field – recently converted into a surface parking lot after the band moved its practices to a lot behind the baseball stadium – has similar topographical advantages for a structured site and would provide additional parking closer to academic buildings.

The four-tiered surface lot behind Hunter Library represents the trickiest of the three locations approved for future structured parking, Byers said. Building at that site would possibly entail the acquisition of property and rerouting of Buzzard’s Roost Road so that it would connect directly with Old N.C. Highway 107 instead of dumping traffic onto Central Drive.

In addition, the trustees agreed to request the University of North Carolina’s board of governors to designate six additional WCU tracts of land as “Millennial Campus” properties, which would enable the university to seek public-private partnerships for potential communications infrastructure, student housing and mixed use facilities. Those areas include properties at or near Noble Hall, Norton Road, Whitmire Stadium, Cullowhee Mountain, Brown Mountain and Old Cullowhee Road.