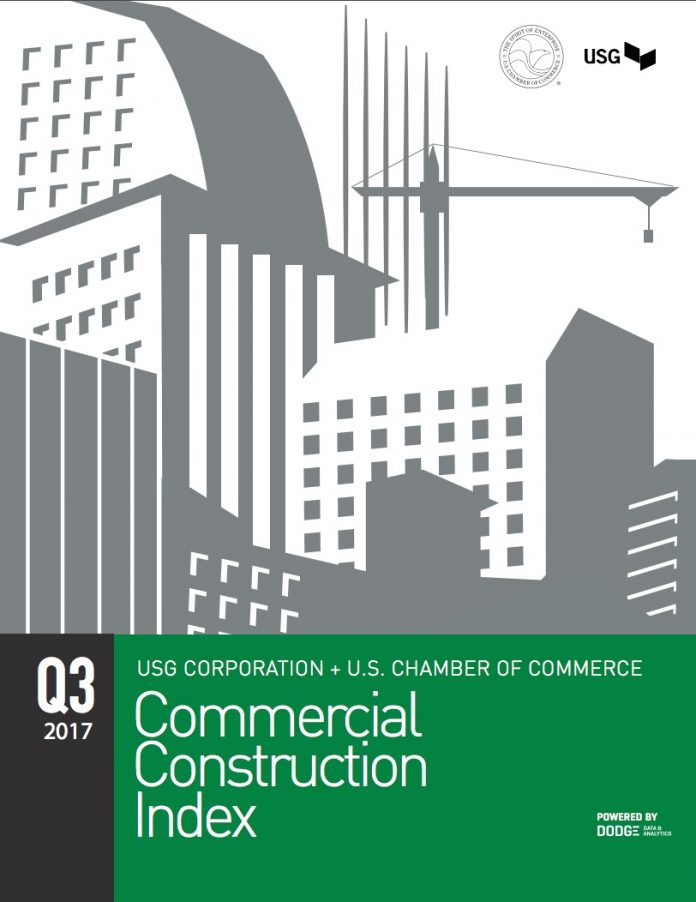 Commercial construction is in high demand across the country and contractors remain optimistic about the current and forward-looking health of the sector, according to the Q3 USG Corporation + U.S. Chamber of Commerce Commercial Construction Index , released on Sept. 18. Nearly all contractors surveyed this summer (95 percent) expect revenues to grow or remain stable over the next 12 months compared to the prior 12 months, nearly the same percentage as in the Q2 2017 survey. Most contractors (93 percent) also expect to see profit margins stay the same or increase in the next 12 months, reflecting healthy contractor sentiment.

Despite contractors’ expectations for growth, access to talent continues to pose challenges in the third quarter of 2017, with 60 percent of contractors having difficulty finding skilled workers, compared to 61 percent in Q2. Nearly all contractors (91 percent) said they are at least moderately concerned about the skill level of the workforce, with 66 percent of contractors in the South expressing concerns about the availability of skilled labor. The Index release comes on the heels of Hurricanes Harvey and Irma, which are expected to exacerbate existing concerns about labor shortages in the South.

“The Commercial Construction Index is unique in providing the contractor’s view of the state of the industry, which is a key driver of the U.S. economy,” said Jennifer Scanlon, president and chief executive officer of USG Corporation. “This quarter’s findings reveal strong optimism about future prospects for the industry, and also highlight a real need to address ongoing concerns about skilled labor shortages and the impact it has on building in the U.S.”

The Index looks at the results of three leading indicators to gauge confidence in the commercial construction industry – backlog levels, new business opportunities and revenue forecasts – generating a composite index on a scale of 0 to 100 that serves as an indicator of health for the contractor segment on a quarterly basis. The Q3 2017 composite index score was 73, down slightly from the second quarter’s 76, but close to the first quarter’s 74, representing a consistent sentiment of health in the sector.

The Q3 results from the three key drivers were:

Backlog: On average, contractors currently hold 9.5 months of backlog, close to their average ideal amount of 12 months, indicating a steady market and healthy amount of booked work. This represents 77 percent of their ideal backlog levels.

New Business: More than half of contractors (54 percent) reported high confidence in new business over the next 12 months (compared to 59 percent in Q2).

Revenues: The majority of contractors (67 percent) continue to expect revenues to grow or remain stable in the next year, although expectations for the rate of expected growth inched toward more modest levels (compared to 71 percent in Q2).

“The commercial construction industry employs millions of Americans and the contributions the sector makes to the U.S. economy are vital to our country’s growth,” said Thomas J. Donohue, president and CEO of the U.S. Chamber. “However, finding skilled workers remains a challenge for this industry, and it’s likely to remain a challenge in the areas affected by the recent hurricanes. Finding skilled construction workers will be essential to ensure the Gulf region is able to quickly and efficiently rebuild. Our nation must address our workforce challenges to enable the economy to grow.”

This quarter, contractors surveyed were also asked about workforce skills development after revealing insights last quarter about the increasing difficulty in finding skilled workers. Respondents identified safety, technical proficiency, and communication as the most valued skills on the jobsite. Of note, there is a wide gap (40 percent) in the number of contractors who note the importance of communication skills and those who think their workers have strong skills in that area.

Just over half (53 percent) of contractors surveyed in Q3 said they plan to hire new workers, a decrease from 66 percent in Q2. This is accompanied by a 10 percent increase over last quarter in the number of contractors that plan to keep the same number of workers, indicating an anticipated shift from hiring staff to maintaining staff levels in the upcoming fall and winter months. Looking forward, only 39 percent of those surveyed in the third quarter predicted the situation will worsen, down from nearly a half (47 percent) in Q2, indicating that although there are shifts in the hiring environment, contractors believe it to be stabilizing. This situation bears monitoring in the coming months as parts of the Southern United States begin rebuilding from Hurricanes Harvey and Irma.

NC businesses can apply for as much as $100,000 in COVID-19 cost mitigation grants