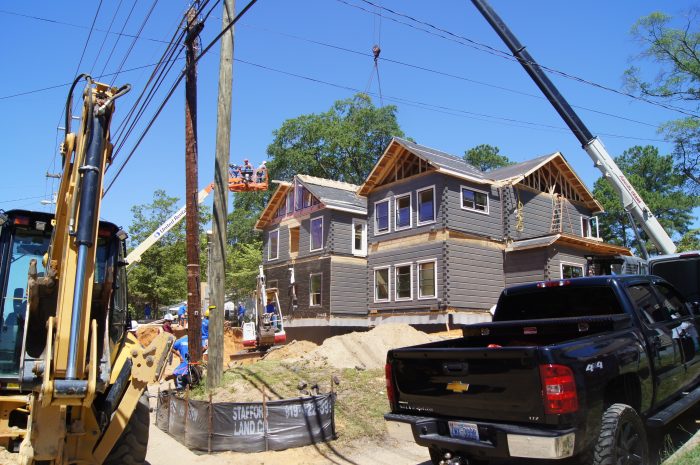 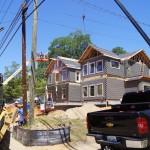 It’s not often that a builder is so proud of a project that didn’t earn a dollar for his company. In fact, it cost the company time, materials and labor, during a period in which a lot of colleagues are struggling because of the bad economy. But when Extreme Makeover: Home Edition contacted Blue Ridge Log Cabins President Chip Smith about a project in Fayetteville, Smith didn’t hesitate. He and his company wanted in — despite the tight deadline of 106 hours between the tearing down of the old house and the reveal to the homeowner.

Blue Ridge always has been civic-minded, Smith says, and it has explored the prospect of working with the popular television show before. The cause was great: The project would tear down and rebuild the residence of former Navy chaplain Barbara Marshall, who was using it as what she called the Steps-N-Stages Jubilee House, a shelter for homeless women veterans. If that wasn’t enough, first lady Michelle Obama would be at the reveal, when host Ty Pennington leads the crowd in shouting “Move that bus!”

Most of Blue Ridge’s 100 employees made the trip from the headquarters at Campobello, SC, to work on the project at one point or another. They were joined by about 4,000 volunteers. Blue Ridge had begun planning the project in May and started making the 13 modular units that would be used for it. But even that head start didn’t make things easy. “We worked right up until the deadline before Ty was supposed to be there and Michelle Obama. We were anxious.”

Paul DiMeo, one of three Extreme Makeover designers who was part of the project, says he enjoyed the experience with Blue Ridge and its modular components. “Out of 190 homes, we’ve done this kind of home four times,” DiMeo says. The Jubilee House project included two 3,000-square-feet dwellings — one for Marshall and for the homeless veterans she helps. The two structures are connected by a breezeway. “What’s wonderful about this modular system is it already comes with drywall and electricity. You just have to connect all these things together.”

While Blue Ridge was working on the residential portion of the project, Garner-based Creative Design Builders added a custom-designed greenhouse. Owner Janae Vogg says producers told her the greenhouse would be the “wow” factor of a project in Fayetteville. “But they don’t tell you much information at the time,” she says. “All that comes exactly when they say it will be released — not until Ty and crew knocked on the door.”

Vogg says the 16 by 20 foot greenhouse is more like a detached sunroom, with a reinforced poly-carbonate roof and a water and cooling system. It will be used to grow fruits and vegetables, but it has an air-vac system — similar to the pneumatic tubes at a bank drive-through — connecting it to the kitchen. When all was said and done, the company donated about $36,000 in materials and labor to the project. Vogg’s crews worked round the clock, using spotlights to keep the effort going. The walls were manufactured at the company’s plant but had to be reassembled on site. She maintains it was worth the company’s time and effort. “I got to meet Mrs. Marshall. Her cause is real noble, and she’s such a calm, serene and gracious lady.”

Unlike other contractors, Creative Design Builders didn’t finish the project before the reveal — but that was on purpose. Mrs. Obama planned to be in the greenhouse for the unveiling, and the glass windows would have sent temperatures soaring inside the structure. They left the glass out and went back to complete the installation in mid-August.

Dave Varner, president of Salisbury-based Superior Walls of North Carolina, says his crews installed about 400 feet of concrete walls for the basement of Jubilee House. The custom walls were lowered onto a bed of crushed stone. The company is experienced both with Blue Ridge and with Extreme Makeover. “We do all their basements that we can get to,” Varner says, noting that the Pennsylvania-based parent company has 14 factories. But it found problems when it showed up Saturday morning for its part of the project. “The excavation wasn’t fully done because the excavator got a late start and ran over about seven hours,” he says. “We did a lot of excavation ourselves.” Varner says the nine-man grew “jumped in machines and grabbed shovels,” working 24 hours to help make up time.

Teresa Wilson, owner of Asheville Cranes, worked with Superior Walls setting the walls and then placing the 13 units. “We have worked with Blue Ridge Log Cabins for years,” Wilson says. The company took two cranes to the site, with one working in front of the house and one in back. “The operators worked together setting the boxes,” she says. “One would set a couple, then the other. It was a very smooth operation. “In fact, it was smooth enough that lost time was made up. “The project was behind about seven or eight hours when we began setting the walls because of problems with the grading,” Wilson says. “We first set the walls and then began setting the house. When we finished setting the house at 6:30 a.m. on Sunday morning, the project was ahead of schedule.”

The producers contacted Snow’s Landscaping & Lawn Care, a local Fayetteville company, to handle the rest of the landscaping around the residence. Owner Frank Snow says his company also provided irrigation, low-voltage lighting and retaining walls for the site. “Trying to fit it in was the hard part,” he says, noting that his efforts also were hampered by the delays. “But we overcame it by pitching in to do things that we weren’t going to do.”

Jimmy Hall, owner of Jimmy Hall Heating and Air Conditioning in nearby Hope Mills, says he was recruited by Blue Ridge to design and install six Goodman heat pumps for the project. He agreed to help, despite some concerns. “The timeline was a little bit of an issue and working with so many people on the job,” Hall says. “There was so much going on at one time. You had to fit in your little space.”
He said he and his crew managed to put aside any distractions from the cameras or the impending visit by the first lady. “We knew we had a mission we had to complete on time. We just blocked that out. We knew we had to get it done.”

Ultimately, Hall and others always kept their eyes on the final prize. “I met Barbara Marshall in the end,” he says. “She’s just a super lady. She’s really doing great work out there. It was given for a good cause.” That’s why Blue Ridge and Smith wanted to be part of the effort. “I believe that we all are presented with opportunities throughout our life to help others,” Smith says. “Sometimes we don’t know what the full scope of that requirement that’s going to be placed on us. Often our lives are defined by what we do when presented with that opportunity. You can’t measure that in dollars.”