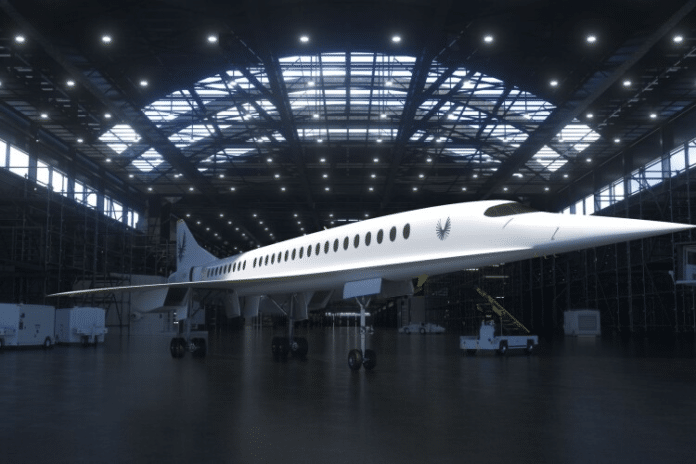 Boom Supersonic says it will build its new supersonic airliner at a superfactory in Greensboro at Piedmont Triad International Airport (PTI).

Construction of the Overture Superfactory will begin later this year and production will begin in 2024, the company said in a Jan. 27 statement.

“It is both poetic and logical that Boom Supersonic would choose the state that’s first in flight for its first manufacturing plant,” North Carolina Gov. Roy Cooper said in the statement. “Like the success of the Wright Brothers at Kitty Hawk, this innovative company will succeed by transforming passenger air travel with speed and sustainable energy.”

The project will bring an investment of more than $500 million through 2030 at the site.

The Overture Superfactory site was carefully chosen with air and ground space ready for development in mind along with its proximity to the coast, as well as North Carolina’s plentiful and skilled workforce and world-class infrastructure. The PTI location includes 65 acres for the company’s manufacturing needs. In addition to the size requirements, the PTI site offers easy connectivity to Interstates 85 and 40, and a short drive to over 400 aerospace suppliers spread across the state.

“Selecting the site for Overture manufacturing is a significant step forward in bringing sustainable supersonic air travel to passengers and airlines,” said Blake Scholl, founder and CEO of Boom Supersonic. “With some of the country’s best and brightest aviation talent, key suppliers, and the state of North Carolina’s continued support, Boom is confident that Greensboro will emerge as the world’s supersonic manufacturing hub.”

.“North Carolina has long been a preferred destination for leaders and pioneers in flight and aerospace, dating back to the Wright Brothers’ selection of Kitty Hawk for their experimental flights in the early 1900s,” said Christopher Chung, Chief Executive Officer of the Economic Development Partnership of North Carolina. “We are delighted that Boom recognized North Carolina’s investments and commitment to become an aerospace manufacturing and research hub, and our highly qualified and motivated workforce will now have another avenue to further their careers here in the state.”

The news release says Boom is reimagining supersonic flight thanks to advancements in aerodynamics, materials, and propulsion. Overture will fly at subsonic speeds over land and near coasts to avoid exposing people on the ground to sonic booms.

“Over the ocean, Overture will cruise at supersonic speeds, cutting many flight times in half while offering a tranquil travel experience for passengers,” the statement says. “Boom’s Overture aircraft will meet the same regulatory noise levels currently required of subsonic aircraft during take-off and landing. Overture is designed to run on 100% sustainable aviation fuels, and it is being developed with responsible manufacturing processes and aircraft end-of-life recycling in mind. Additionally, the Greensboro assembly line will be LEED-certified.”